VESA has announced that USB 4 is going to be even more versatile that we thought. Thanks to the new “DisplayPort Alt Mode 2.0” spec, USB 4 will be able to fully support the DisplayPort 2.0 standard, allowing it to power up to three 10K monitors at the same time, or one 16K monitor, at 60Hz.

In case you missed the announcement last July, the DisplayPort 2.0 standard uses Thunderbolt 3 technology and a USB Type-C connector to send an incredible 80 Gigabits per second (Gbps) in a single direction by basically turning a bidirectional Thunderbolt 3 connection into a unidirectional superhighway for a DisplayPort video signal.

This allows DisplayPort 2.0 compatible devices to power up to two 8K monitors at 120Hz, three 10K monitors at 60Hz, or even one 16K monitor at 60Hz, without chroma subsampling.

But if it’s already a USB Type-C connector and Thunderbolt tech, what’s preventing it from working through a regular USB 4 port? Can’t we just add DisplayPort 2.0 support as an alternate mode? That’s exactly what VESA did by releasing a new and improved “DisplayPort Alt Mode 2.0” spec. This will allow USB 4 connections to support the DisplayPort 2.0 standard natively by remapping the pins to work in a single direction.

So instead of two lanes one way (40Gbps) and two lanes the other (40Gbps), you get all four lanes transmitting data a single direction, maxing out at just under 80Gbps. 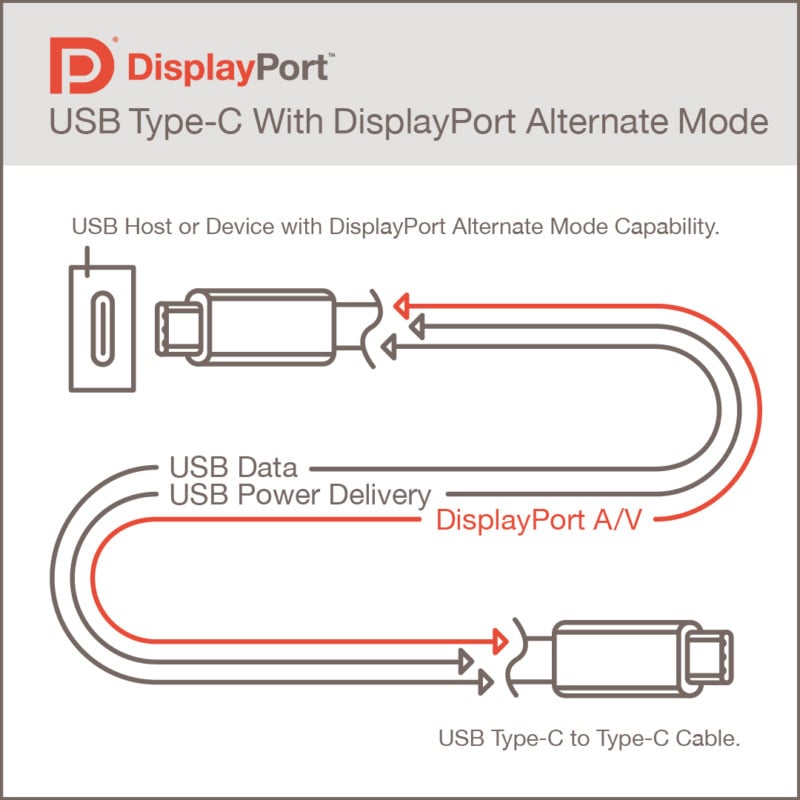 “USB Type-C is becoming the connector of choice in notebooks and mobile solutions,” explains VESA board vice chairman Syed Athar Hussain in the announcement. “With the new DisplayPort Alt Mode 2.0 specification, USB Type-C now delivers compelling single-connector solutions for […] professional HDR displays that combine 80Gbps of video bandwidth and other important features of DisplayPort 2.0 with the transport of USB data and power delivery.”

This update makes USB 4 that much more compelling as the “one connection standard to rule them all,” with power delivery, Thunderbolt 3.0 transfer speeds, and DisplayPort 2.0 video bandwidth, all through the same port. And according to Anandtech, this should be supported by most active USB 4 cables without requiring that monitors have a USB 4 controller built in.

To learn more about this standard, read the official announcement on the VESA website or check out this detailed deep-dive on Anandtech. According to VESA, we can expect to see the first compatible DiplayPort Alt Mode 2.0 devices in 2021.