As the coronavirus pandemic brings the world economy to its knees, retail intelligence firm Stackline put together a report identifying the 100 fastest growing and 100 fastest declining industries based on e-commerce data from March. No surprise, the outlook is especially grim for cameras.

According to the Stackline infographic—which compared March 2019 to March 2020 using e-commerce sales data from across the United States—Cameras are the third fastest declining businesses in the country right now, with sales dropping a whopping 64%. Only two categories did worse: “Luggage & Suitcases” and “Briefcases,” which both saw sales drop by 77% year-over-year.

That 64% number is brutal, but unsurprising. A recent BCN report showed that mirrorless camera sales in Japan were down by 50% in March 2020 vs March 2019, and while we usually try to factor in regional differences, the economic impacts of the coronavirus pandemic have not been confined to a single region. You can see some of the other industries called out by Stackline below, or browse the full list of 200 at this link: 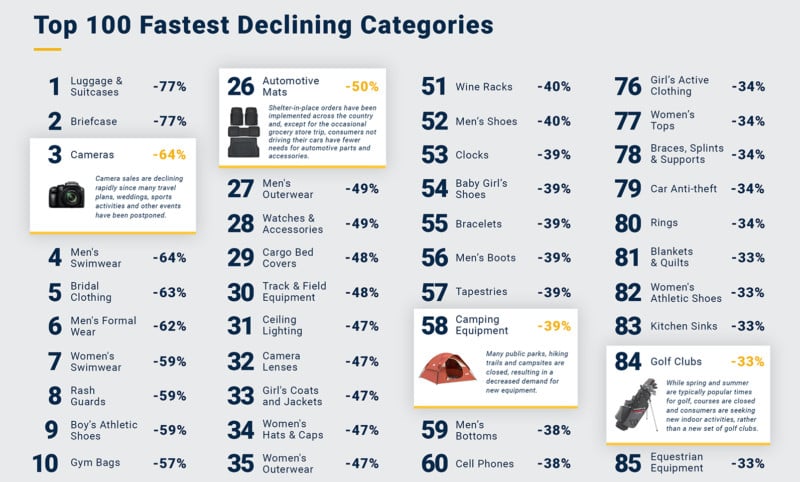 These e-commerce numbers confirm what the BCN data already hinted at: not just March, but the entire rest of this year will be the most difficult yet for camera makers, who were already fighting an uphill battle against the smartphone revolution.

In mid-March, we wrote that the coronavirus pandemic would force companies to “find the floor” of the industry—that number at which sales stabilize and brands can figure out how many cameras they can reasonably expect to sell in an average year—far more quickly than they had hoped for or anticipated, and adjust accordingly:

With less R&D money to go around, companies will need to cut operating expenses more aggressively than they have in years, focus on the products that turn a profit, and shrink to fit the market that they’re actually playing in… or diversify… or get off the field entirely.

Now, as the real-world ramifications of the worldwide economic shutdown start to hit, we’re seeing just how low those numbers can really go, and holding our breath to see how fast and how far they recover when this is all over.

Russell Kirsch, Inventor of the Pixel, Passed Away This Week