In a project that took 5 years to capture, 500 hours of editing, and 42 total hours to process, astrophotographer Matt Harbison has completed a dream started in 2013: capturing, processing, and making available an incredibly detailed 2.5 gigapixel photo of the Orion Constellation.

Harbison wrote that the idea to capture this image begain in 2013 and started taking place in 2015. Over the course of five years he shot thousands of photos cataloged into 200 panels that he would eventually process into one finished photo of the Orion Nebula. Called The ORION Project, Harbison describes creating this image as the culmination of years of interest in the stars.

“I suppose the best thing to say is that I could identify the familiar symmetry of Orion at a young age,” Harbison says. “I viewed it through rustling leaves as a child on camping trips with my parents and grandparents. I looked for it when my Mom signed me up for Boy Scouts, and where I looked through my first tiny telescope at Skymont Boy Scout camp.”

In 2015, Harbison saw the release of a new camera, the QHY 16200 CCD mono camera, and after doing his research invested in the system in 2016. It was this camera that he decided to utilize to bring his Orion Project to life.

“I fully committed to this sensor for my project.”

The QHY 16200 CCD APS-H camera with an integrated 7-position filter wheel is designed specifically for astrophotography and retails, when in stock, for around $4,800.

Where Harbison had previously captured an image of the Nebula on a 10-11 pixel scale, using the QHY 16200 camera would change that to a 1.6-pixel scale of the constellation Orion.

“I was certain this would reveal the true nature of that space- behind the clouds, behind the colors,” he said. “This would become my ORION Project: Five years. 2,508 individual images, 500+ hours of integration, lots and lots of patience.”

As you can imagine, capturing thousands of images of the constellation would require hundreds of nights of shooting. 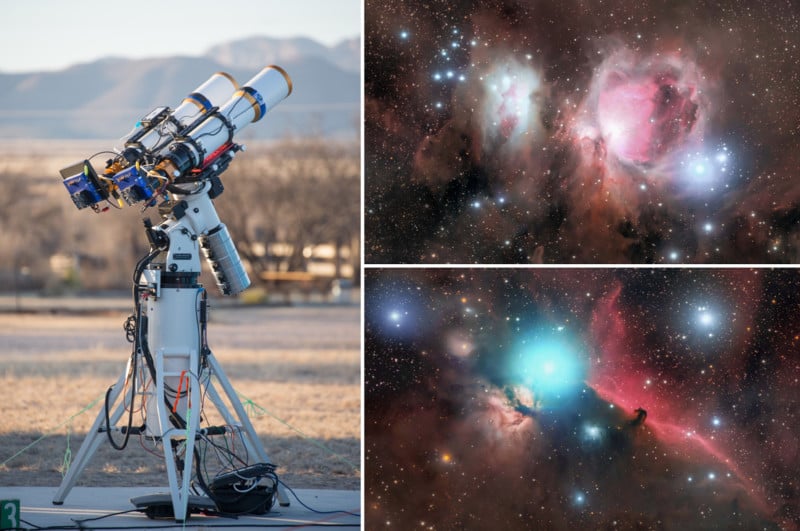 “The image posed many problems from the start- balancing differing sky conditions per night, aligning to the same star position each and every night, and meticulously returning to a position just a few thousand pixels North, South, East, or West,” Harbison said. “Aside from the challenge of software, there were also the continual hardware problems and challenging weather conditions in East Tennessee. Sure, there are some good nights, but there are some not so good nights as well,” he explained.

“My fellow astrophotographers and I actually retrofitted ice fishing tents to use as astronomical shelters.”

Even after all the images were shot and each panel completed, the finished image did not come together smoothly. “I began in 2015 on a Mac Pro with 2 Xeon Processors and 64GB of RAM. This machine was easily one of the fastest computers of the day, and it carried me all the way up to panel 47 where I believe I hit the RAM limit of the computer.” 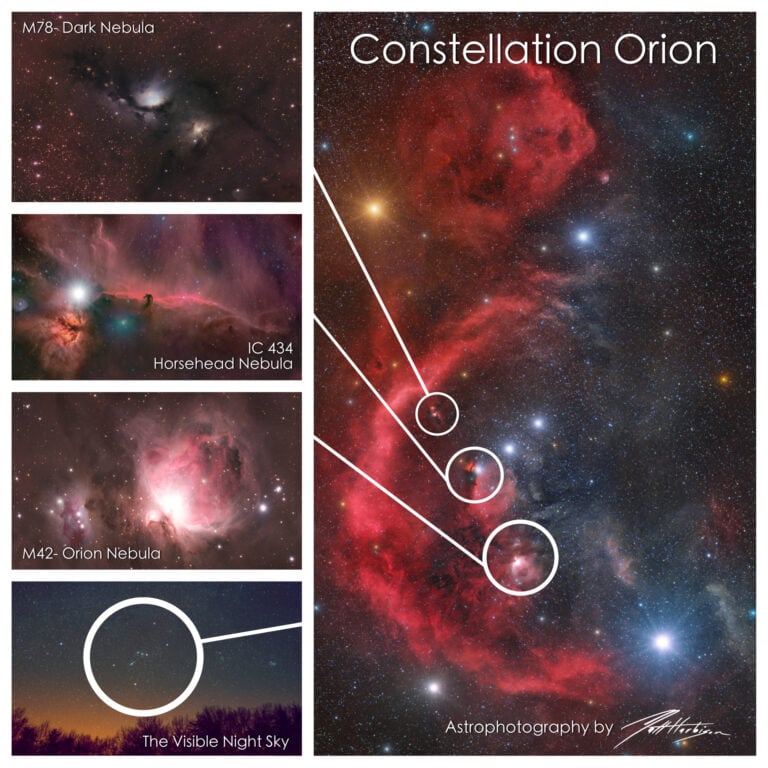 It would take five years from that point for technology to catch up to Harbison’s needs as he wouldn’t have a computer powerful enough to complete the task until August of 2020. “The new computer is an AMD Threadripper with 24 cores and 256GB of memory,” Harbison said. “It took a total of 23 hours to provide an astrometric solution for all 200 panels and then an additional 19 hours to merge into the gradient merge mosaic tool.”

But finally, years after he began the project, his 2.5 gigapixel image of the Orion Constellation is complete, and you can view it for yourself here. The image is fully navigable, so you can peruse even minor details of the constellation at your leisure.

Below is a scaled version of the compiled photo: 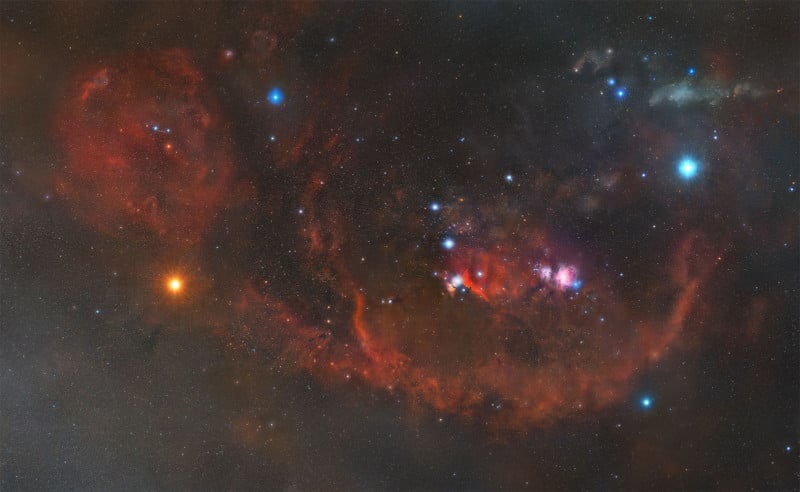 And here are two images that result from zooming into sections of the original. As you can see, the detail is extraordinary: 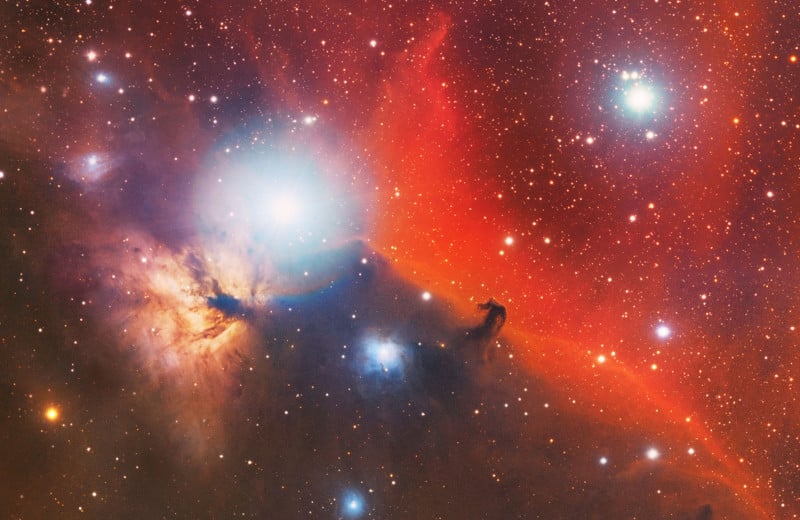 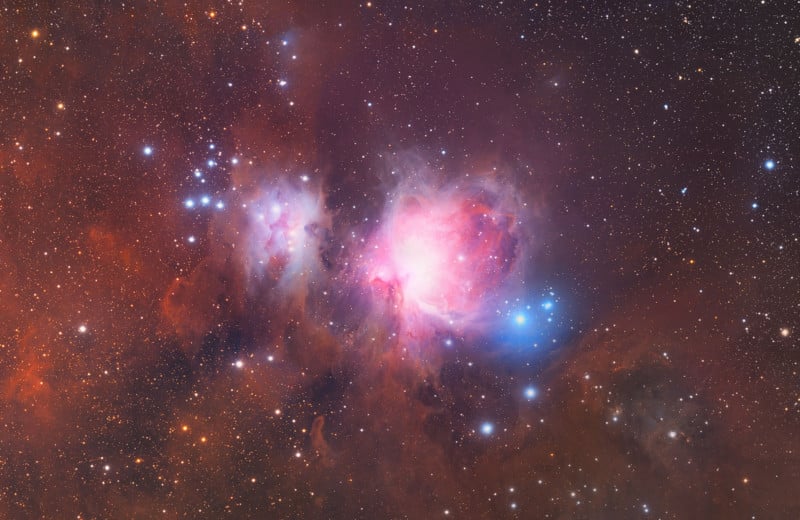 This is Harbison’s full timeline of the ORION Project:

What Harbison has achieved here is nothing short of monumental. His extraordinary effort has provided what is likely one of the most – if not the most – detailed image of the Orion Constellation ever conceived, all borne from the curiosity he felt as a child.

The entire story is worth a read as he goes into even more detail about how this image came together. Harbison also has detailed breakdowns of all his camera telescopes and their arrangement available to view here.