Sony Artisans Renan Ozturk and Taylor Rees recently captured something incredible, both photographically and physically. In partnership with Sony, they shot some spectacular photos and video of slack line artist Andy Lewis performing a free solo high line between two desert towers in Utah, with a massive moon as his background.

As with any “once-in-a-lifetime” image, capturing these shots took an incredible amount of planning, followed by an incredible amount of frustration and trial-and-error to get them just right. Month after month, they would try and fail to capture the shot they were looking for as clouds got in the way or locations or timing got screwed up.

In terms of gear, they were shooting video on the new Sony a7S III, with some stills captured on the higher-resolution Sony a7R IV. In order to get the compression they needed for that massive moon, it was all captured from far, far away using 600mm f/4 G Master lenses with 2x teleconverters attached.

You can get a peek behind the scenes below: 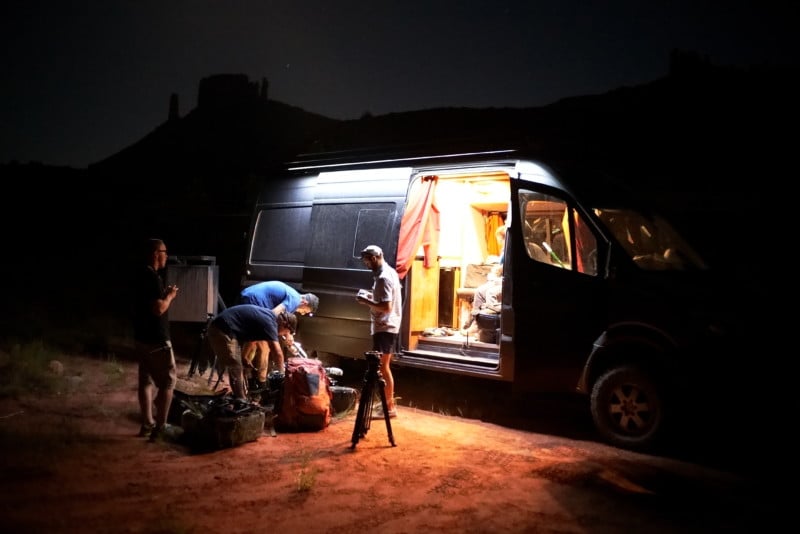 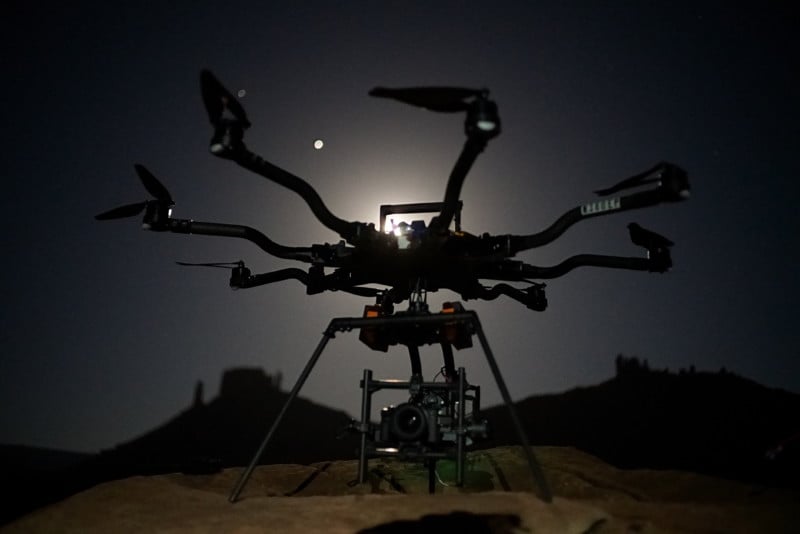 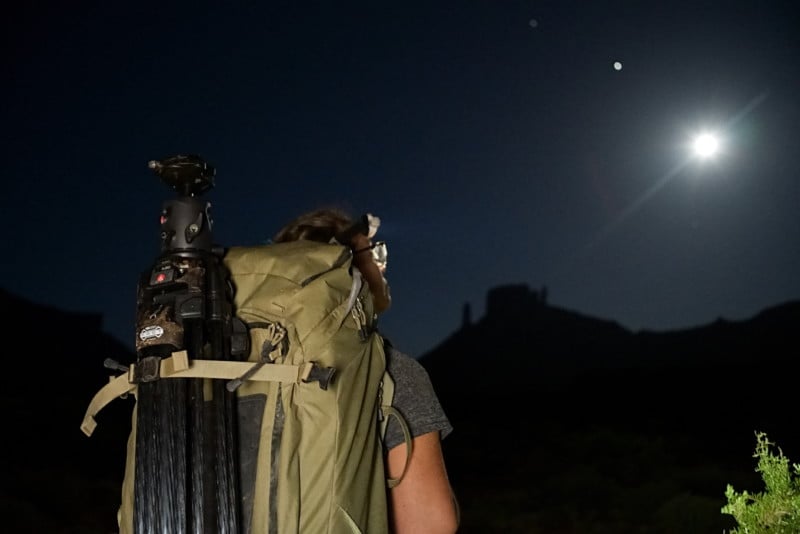 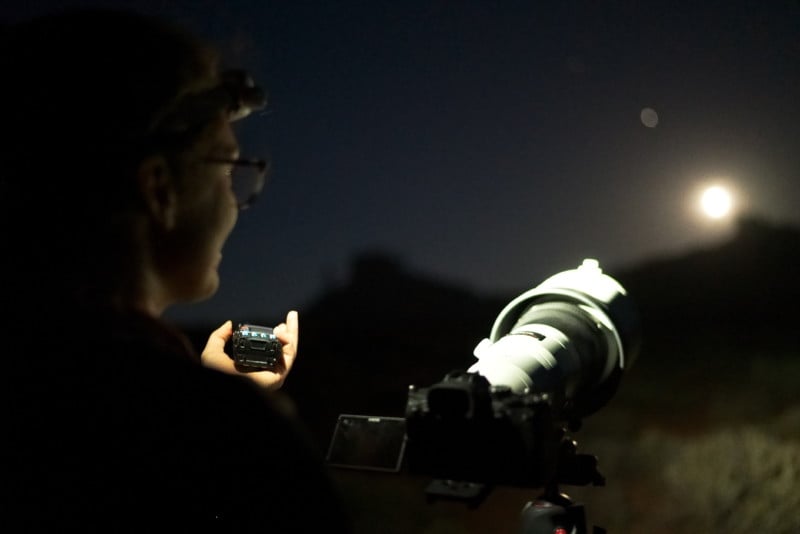 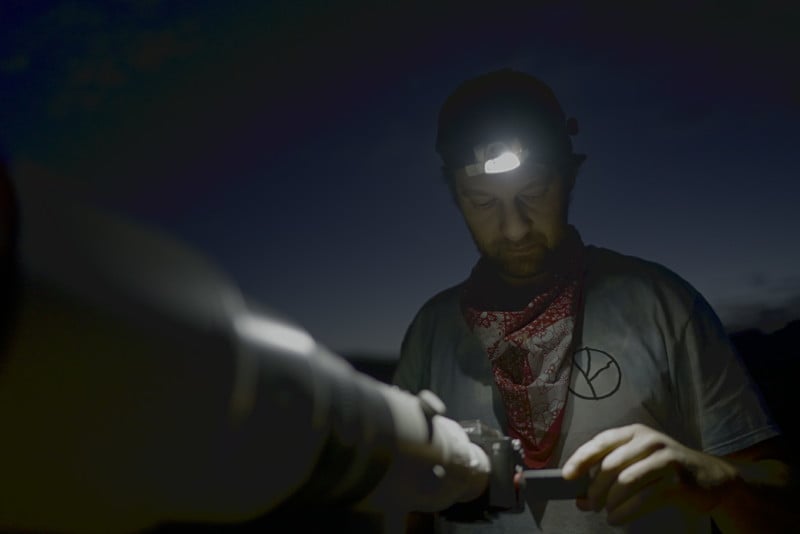 When Ozturk, Rees and their crew did finally manage to line everything up just right—literally and figuratively speaking—the result was magic. 4K/120p slow motion video in the middle of the night, captured at 16,000 ISO, paired with stills captured on the Sony a7R IV at 1200mm.

All while Lewis walked across the slack line with no ropes, before parachuting off the edge of the cliff when the shoot was done.

Here’s the “hero” shot, as far as we’re concerned: 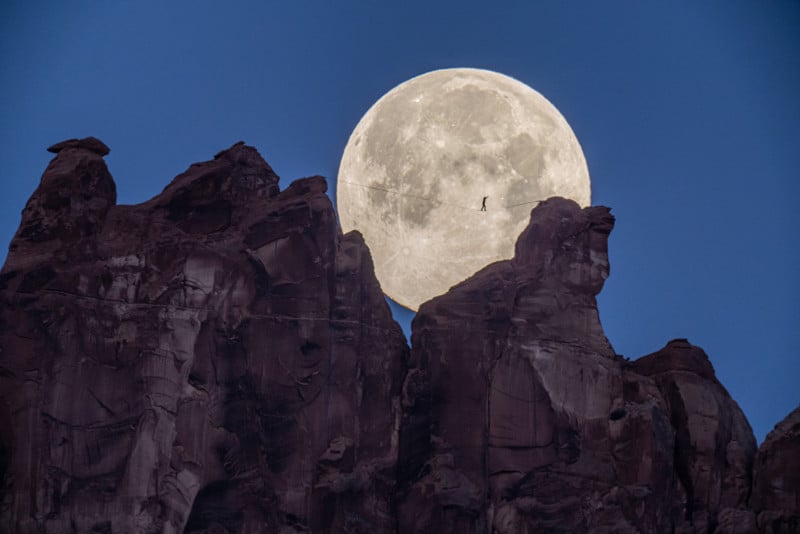 And here’s a sampling of the other images that they were able to capture over the course of their shooting and scouting trips: 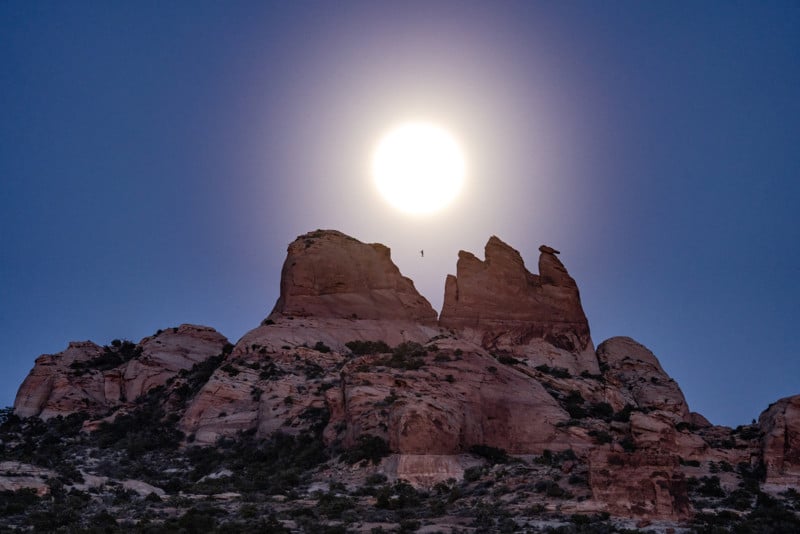 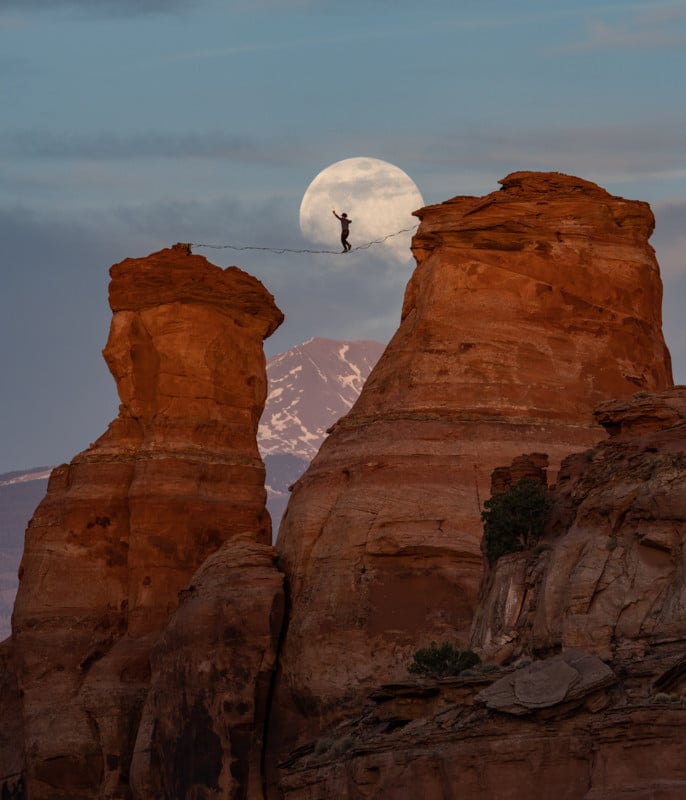 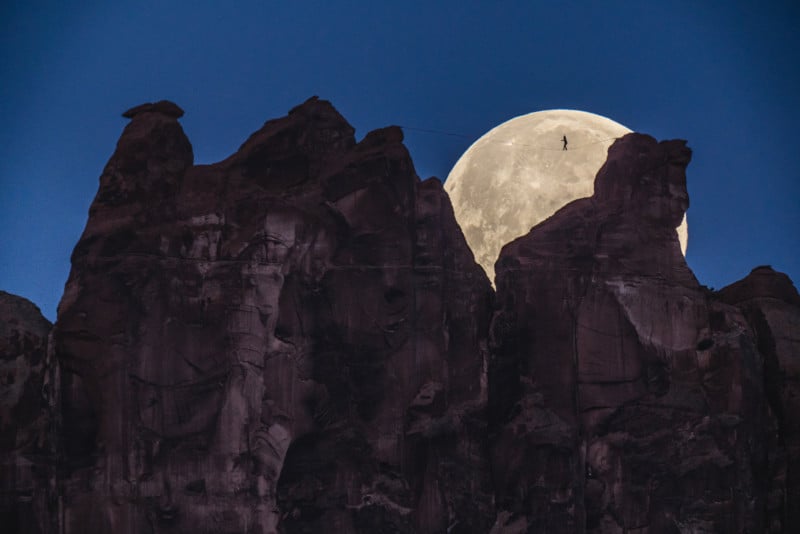 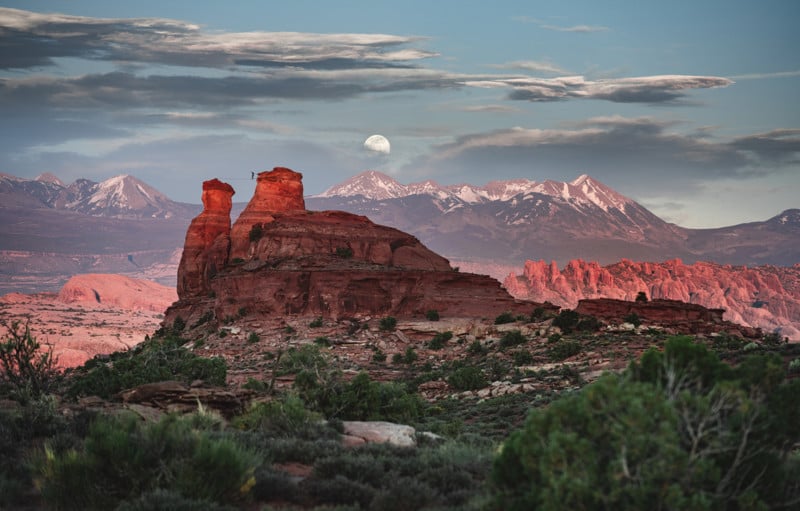 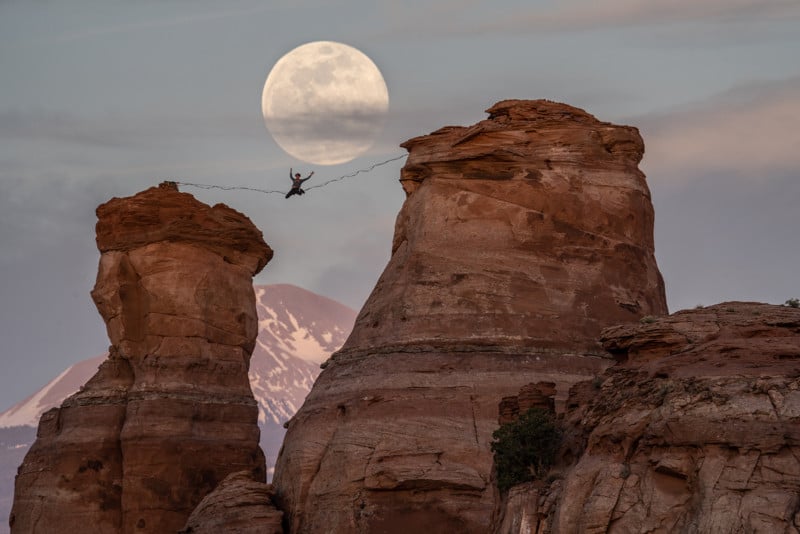 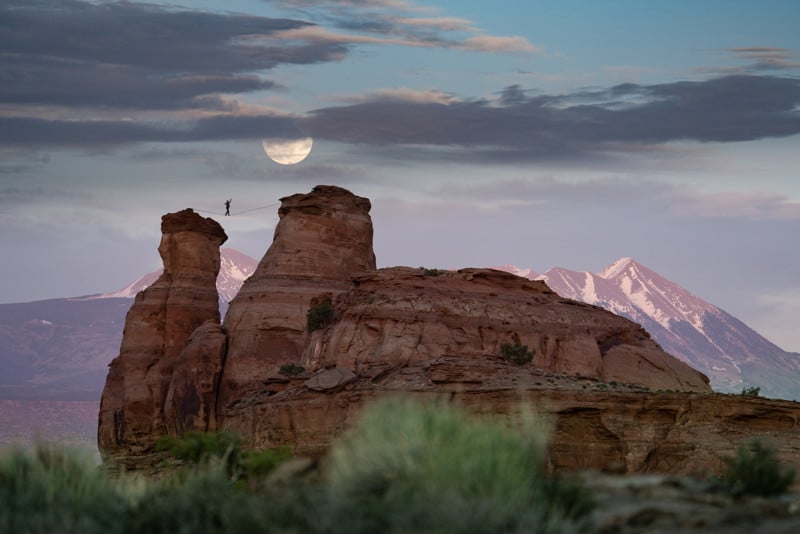 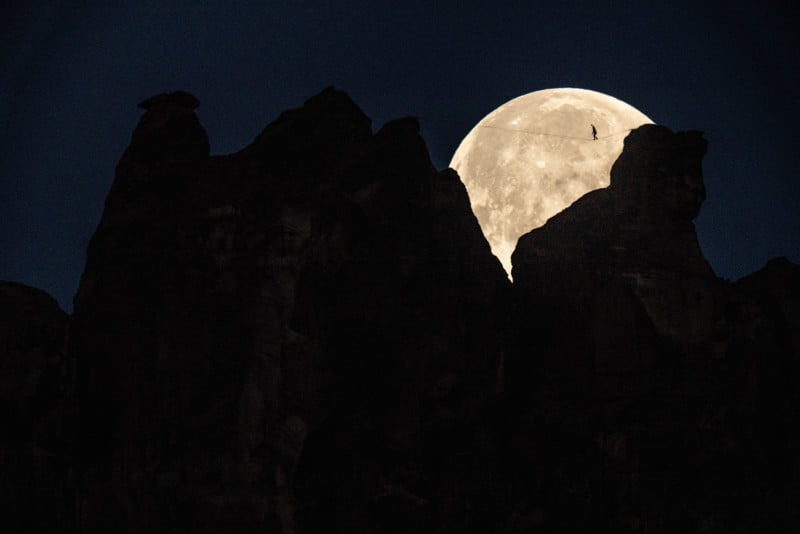 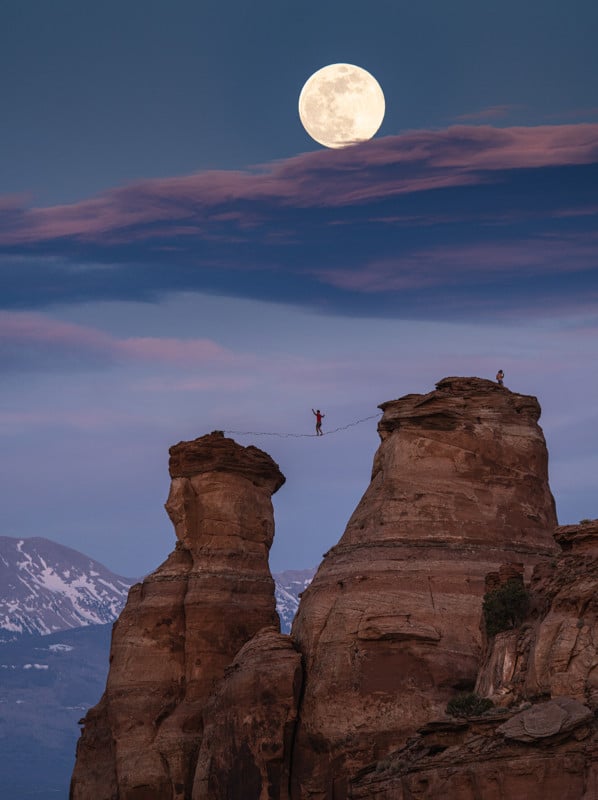 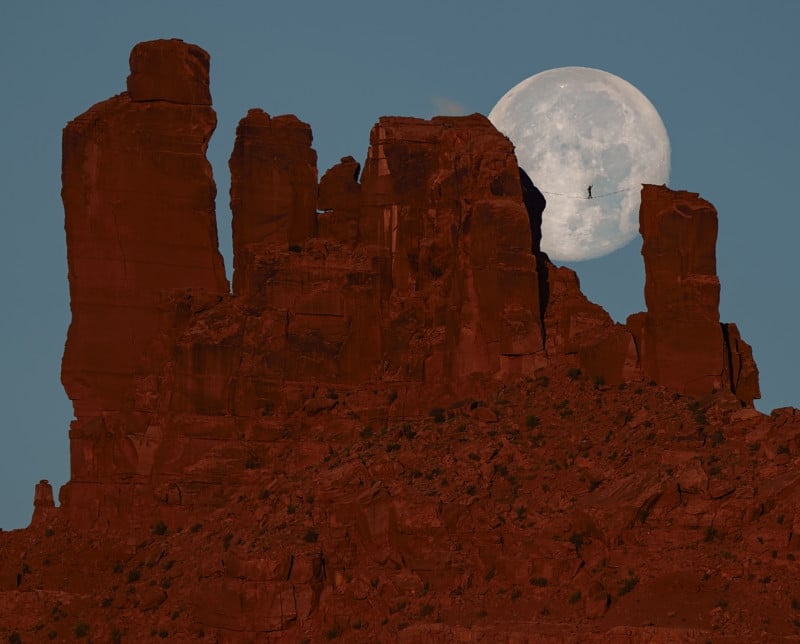 Regardless of the camera involved, you have to admit that they shot something pretty spectacular here. Check out the full video up top to see how Ozturk and Rees pulled this off, and to see the dynamic range and low-light chops of the new Sony a7S III in action.

And if you want to see another image like this, only even more rare, check out this shot of a climber “inside” a solar eclipse.