But, as film photography has become a niche, the temptation to play with those optics has led many photographers to experiment with adaptations of large format lenses shooting in digital full-frame (or even smaller) sensors.

The idea is probably to avail the superb quality of those optics in a medium readily at hand as digital is today. All that is needed is a tube or other sort of adaptation. This article briefly discusses what can be expected from this hybridization.

When one adapts a large format lens to a small camera, only a fraction of its actual image is captured. A 300mm lens designed to work in 8×10, when installed in a 35mm full-frame camera (24x36mm), will deliver the same framing of a scene that a native full-frame 300mm lens would do. But the images are not really comparable. A lousy lens design made for small format will probably outperform the quality of a magnificent optic made for large format. That is intriguing, isn’t it?

The point is that in a lens concept, the focal length and image size are not inherent to that concept. Lenses are scalable. If you double all dimensions you double the focal length. What is absolute and really defines a lens concept is the angle of view and maximum aperture. And it is far more difficult to produce a lens with a broad angle of view than a narrow one. The consequence is that a large format lens will not work as a long-focus lens for a small format.

In order to open the angle of view for a given lens concept, the lens designer has to sacrifice something else. The most obvious is the aperture and that indeed improves the overall image quality at the expense of darkening it.

Another option is to admit a larger circle of confusion for that design. circle of confusion (CoC) is related to the size of a point on the scene that is never rendered as an ideal point, but rather as a small surface on the image. The CoC is the diameter of that surface when seen as a disk.

About that, two assumptions are made:

1. People normally buy and use lenses in line with the format they are shooting.

2. The larger the negative/sensor format, the smaller the enlargement the printed image will need.

Images are made for humans. Billboards are not made to be seen at arm’s length. By the same reasoning, nobody browses a family album with a microscope. So it is perfectly OK to let the CoC grow with the format. It gives lens designers more freedom to enhance other features like the angle of view.

So the industry understands that while 24x36mm needs a circle of confusion around 0.0029mm, an 8×10” format can perfectly live with something 7.5 times bigger, like 0.22mm. That is why a fraction of an 8×10” image will present much lower quality when printed with the same enlargement of the same image originally done in 24x36mm format.

To illustrate this, I used two 300mm lenses. It was a nice match for this test because in all the important features they are similar. Both are f/4.5. Both were produced in the ’70s, by large and well-known brands, so we can expect the same technology level. The real big difference is that the Tessar Jena opens 62-72º while the Olympus Zuiko opens only 8º. 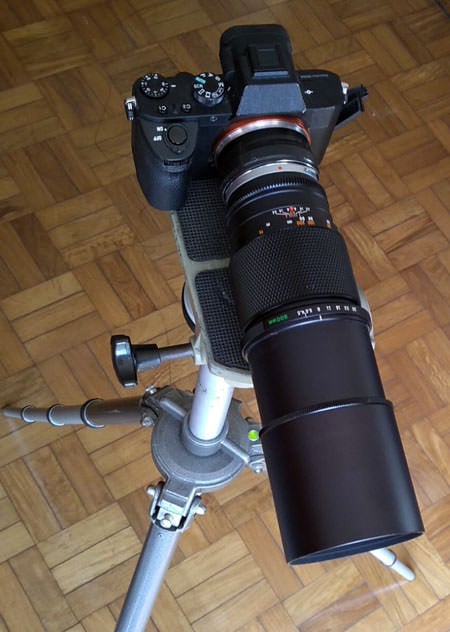 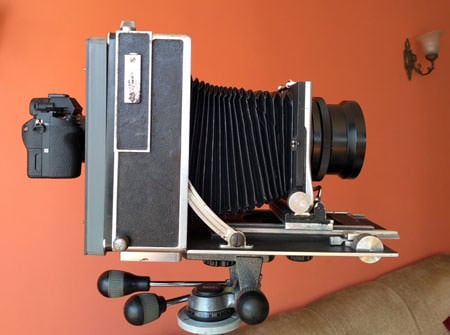 The camera was a Sony a7 II. First with an adapter for the Zuiko lens, and then hanged on the back of a Linhof 13×18 cm for the Tessar.

Above we have the full images produced by both lenses focusing at infinity. As both images were captured by the same sensor and both lenses are 300 mm, there are no noticeable differences in framing. Quality-wise we see already a difference in favor of the 35mm film lens. 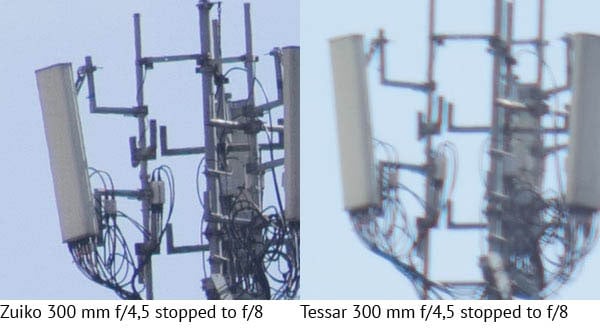 It is obviously wrong to conclude that the Olympus Zuiko lens is better than the Tessar Jena. It is just intended to capture far less information and hence it can do it with more easiness and more detail. The right way to think about it is that if one wants to enjoy classic large format optics, the only way to appreciate their fantastic qualities is by capturing and looking at the full images they are capable to produce.

About the author: Wagner Lungov is a Brazilian photographer and independent researcher based in São Paulo. The opinions expressed in this article are solely those of the author. Lungov graduated with a degree in physics and has an interested in social studies from an image-making point of view. You can find more of his work on his website.

Inside the Mind of a Self-Doubting Photographer

Capturing Both the Crescent Moon and ‘Earthshine’ in One Image

This is How Image Stacking Reduces Noise and Recovers Signal