The new OnePlus 8 Pro is a great Android phone for lots of reasons. It’s got a 120Hz display, Snapdragon 865, and a quad-camera system with not one, but two 48MP Sony sensors inside. But that’s not why it’s making headlines. It’s making headlines because of its 5MP infrared camera, which can actually see through some materials.

This ability came to light on Reddit first, and has since been demoed by several reviewers who have a OnePlus 8 Pro in hand. As you can see in the demos below, it works best on thin black plastics, but it can see through some other thin materials as well:

#OnePlus8Pro Color Filter camera can see through some plastic objects 😯

This effect is made possible by the 5MP ‘Color Filter’ camera used to create what OnePlus has dubbed the ‘Photochrom’ effect. But that’s just marketing speak. It’s no mystery what this camera is: a sensor with the IR filter removed, so it can capture infrared light in addition to visible wavelengths.

And while OnePlus expected this mode to be used to create false color images and unique landscape shots, an upshot of this feature is that certain materials like certain thin plastics become see-through, allowing you to see inside remote controls or an Apple TV as if you have X-Ray vision. 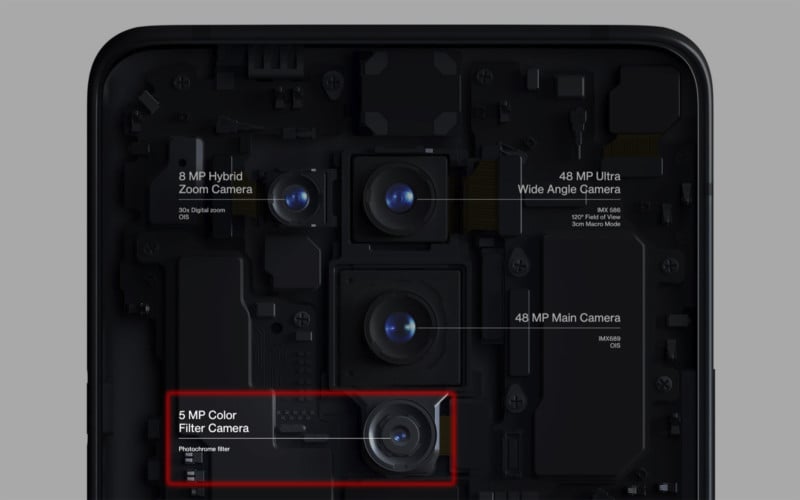 In the end, the feature is a cool party trick and nothing more. But if this party trick gets more people interested in photography, and specifically Infrared photography, we’ll call it a win. To learn more about this phone or pick up a OnePlus 8 Pro for yourself, head over to the OnePlus website.

Minimalist Photos of Swimming Pools from Above