Dutch commercial photographer Roelof Bos has, like many of us, been looking for a creative outlet ever since his professional work ground to a screeching halt. But while many photographers have opted for in-door projects or “porchraits,” he wanted to create something more stylistic… and striking.

Thus was born Lockdown, a series of poignant twilight portraits of his fellow countrymen (and women) coping with isolation in various ways.

The imagery is highly stylized and symbolic. By shooting at blue hour and compositing multiple shots, he’s able to capture photos that feel simultaneously intimate, and symbolic of the dark and lonely times we’re living through. Each image seeks to tell a complete story in a single frame.

But don’t take our word for it. Roelof was kind enough to share his experience in detail, explaining how the project came to be, how it has evolved, and what each individual image represents. Scroll down to hear the story from Bos himself. 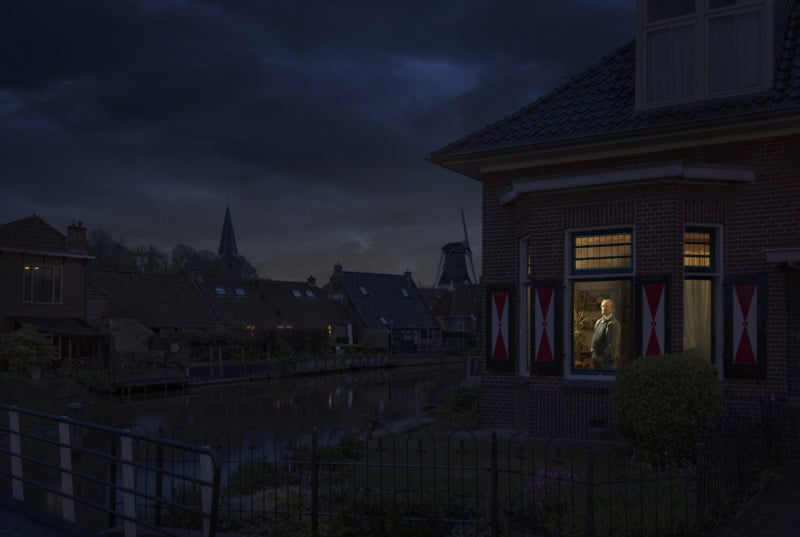 Here in the Netherlands we also experienced a sort of lockdown (of course). Not as tight as in other countries, yet it had a serious impact. I was thinking about what other photographers or artists were doing in reaction to this lockdown, and I felt some light urge to do something myself, especially while my workflow had dropped.

But taking family shots at home (porch photography I believe you call it) or portraying care workers for example isn’t really my thing… too journalistic.

In my daily work as a commercial photographer I most like to work with art-directors who have a great concept, which then can be turned into photographic images by choosing the best location, model, lighting, etc. and when necessary combining several images into one composite. All to achieve an image that tells the story at its best. As a painter more or less.

Recently, while I was walking my dog at twilight, I saw people in their homes with the lights on during the “magic moment” when the sky is still blue. It struck me that this time of day—which is known to me (and many photographers) to produce a nice look when day turns into night—was in fact perfect to show the isolation of people, locked in their homes as seen from the outside. 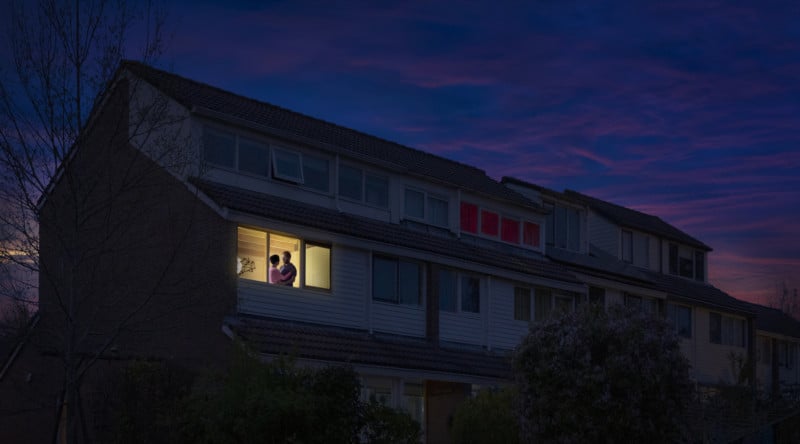 You could shoot a whole house with its environment in near darkness with just one room lit with a person standing there.

Despite the small seize of the person in relation to the entire image (necessary to emphasize the isolation/loneliness), because of the lighting, your eyes immediately go to this person and thus to the “story” of the image. The images could be very beautiful while simultaneously tapping into current events, and the dark setting of the images are also symbolic for the dark times of this pandemic.

At first the plan was to just show people in their homes, doing basic things like “staying connected” on their smartphones with friends. So this was the first one, a daughter of friends in my village: 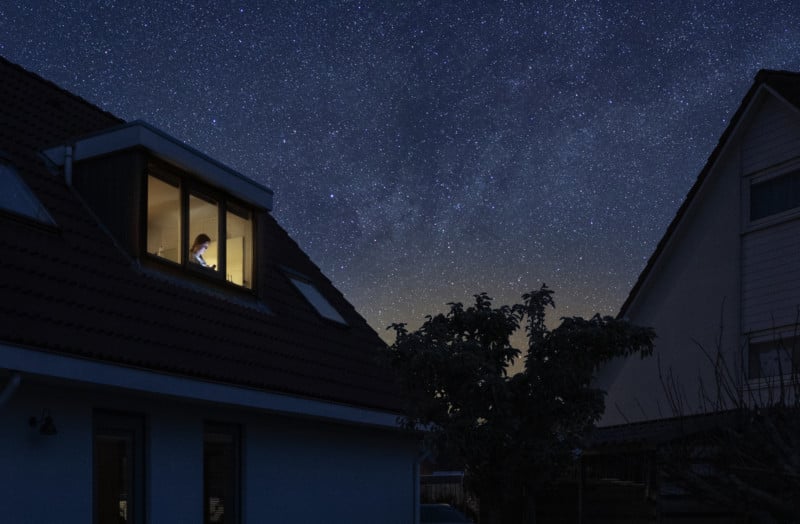 The result was a composite of the houses at the right time of twilight, the best shot of the girl (different lights in the bathroom were explored) and an added night sky shot of the stars. I also added some fake light pollution for “suspense.” The light on her face is actually from the phone. No strobe used.

I posted it on my Facebook, mentioning that it was my plan to make it a series and hence the invitation to participate in being a host/model for a new photo. This resulted in two more images, but the rest were arranged by myself.

Sometimes I was triggered just by the house and the location itself, the “story” then arose together with the model/owner of the house. For instance in this shot: 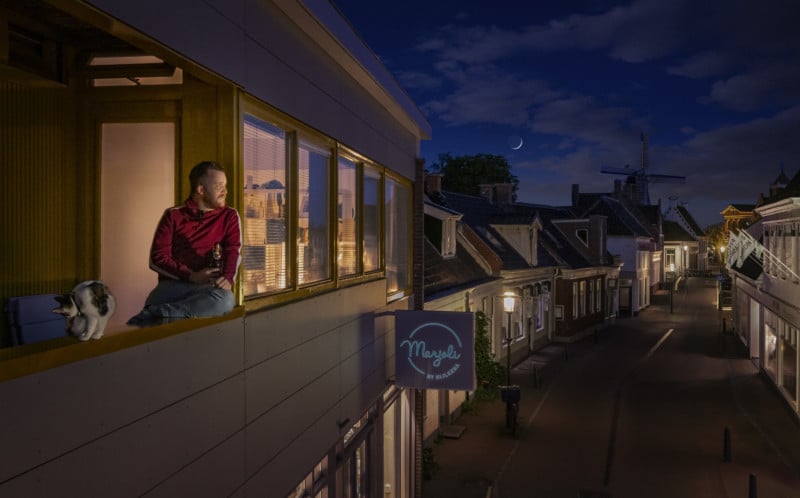 I used a big light stand as a tripod (height in photo is approximately 4 meters) and off camera strobe with warm filter (1 CTO) in the street for the guy. However, I used the house from a shot without the strobe and added the cat from yet another shot, and added the sky and moon. The whole “shoot” took only half an hour at most, but it took several hours in Photoshop to make it look like this.

In most images of the series it is a search for the ideal composition as well as finding a balance in the different brightnesses in the images. Often, I had to darken large parts of the image to not let your eyes be distracted by bright parts in the empty spaces. To obtain the right proportions, I sometimes transformed houses or moved or removed elements which were otherwise attracting too much attention.

The more the series evolved, the more the plan for the image was in my head beforehand, soI began searching for people and locations to best suit the idea. And sometimes I met people whose story or situation were already interesting enough to make it a good image.

For instance this man: he loved old wall-maps (used for education purposes). That’s how the idea arose to show someone who longs to travel. 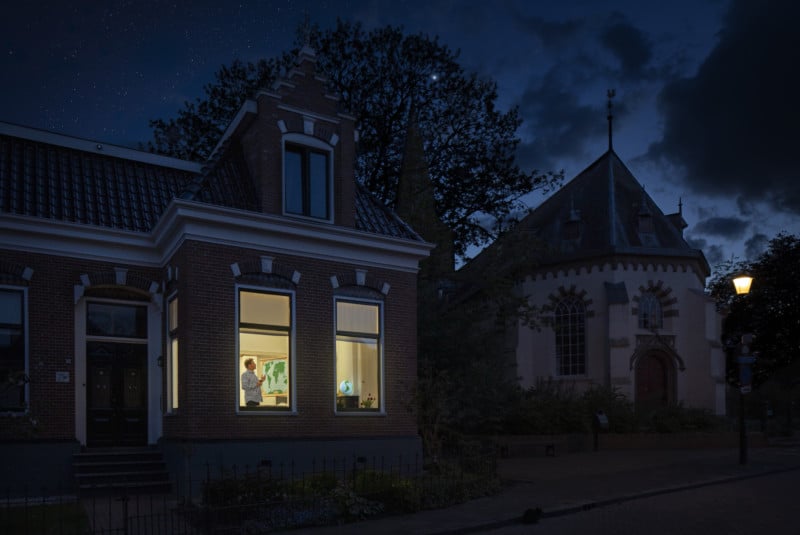 Although you could use the available light from the living room, I did use a strobe indoors, radio-triggered from camera (again with warming filter).

People tend not to be able to stand still for half a second, and I didn’t want to raise the ISO too much because most of the times I shot really wide. I wanted to have the ability to crop afterwards (to avoid making the wrong framing decision because I was losing the light) and sometimes the crop was severe. To end up with a messy grainy person is not what you want. The sky was not replaced, but stars were added.

I noticed that people were more into decorating and construction work in their houses, so I added my friend who is just in the middle of expanding his house.

Ironically, as the model in the shot it looks like he’s making a lot of hours constructing it by himself, while the whole project is done by a building company. This shot was pretty straightforward, although I used different exposure values for the house to give the black wood some visible structure. Stars and Venus added. After the first images and the good reactions I got from social media—I posted on Facebook, Instagram, LinkedIn and Twitter—I really got inspired to keep going. At the same time, there were special days coming.

The 27th of April is Kingsday (birthday of the king, all flags in the streets and normally much festivity), and the 4th of May is Memorial Day (victims of WWII, 75 years this year) and Liberation Day (comparable with VE-day I think). So I starting making images especially for these days, to be posted on these very days–images that would be relevant to both the lockdown situation as well as the day itself and how different people were experiencing them.

For Kingsday, I did this one, with a wife singing the national anthem and a husband who dislikes that and rather enjoys his beer: For Memorial Day, I asked my wife to play “The Last Post,” flag is at half-mast to show mourning, and I added a black edge on the image as well. This shot was taken during daytime, partly because I had a different shot planned in the evening, and partly because the Last Post is at 8pm, a time when it is still not twilight.

To emphasize the mourning, I added the dark sky. 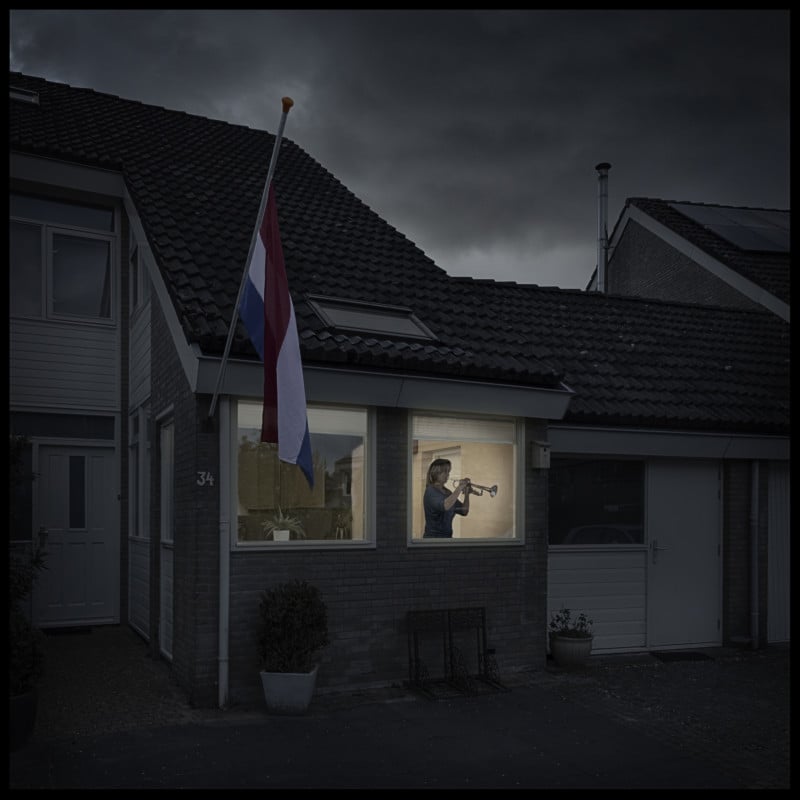 Then came Liberation day (VE-day). Now I could add more layers into the story. Celebration of freedom in a time when one is restricted to one’s home. My father, who has witnessed WWII as a child, saw the bombers fly over his house. Now he sees pigeons (symbol of freedom) as a squadron flying freely outdoors, while he is stuck at home.

This shot took heavy manipulation. I adapted the house (got rid of window and wall on the left), added a flag, a new sky in the reflection, as well as the pigeons of course. My father is taken from a separate shot with strobe, indoor shots mixed with reflection in windows: Then there was going to be a Supermoon. This phenomenon is often over-hyped (IMHO) so this shot is a wink to that hype: a boy searching for the moon… yet it’s behind him. The size of moon is also highly overdone by design.

The camera is my own, because while I was hoping for a real telescope with star tracker, I insisted on getting the photo posted on May 7th so there wasn’t enough time. In the end, the boy (instead of the dad) was willing to pose, so actually a camera on tripod suits the situation better—it’s more of an amateur look.

This shot was captured with strobe once again, and I added some red to the sky. 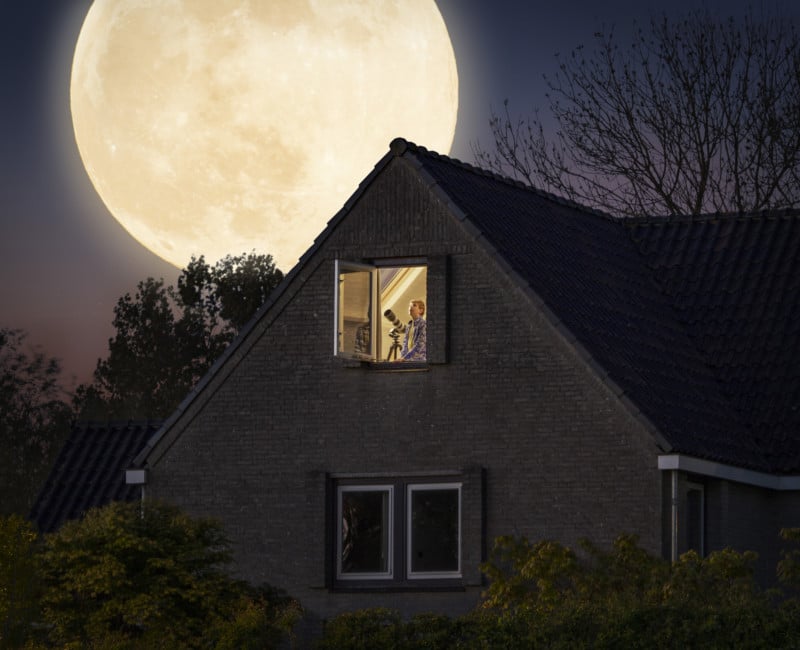 The last image to mention is the reference to the holiday season, camping on your own property. All the images in this series were taken by myself, but to add to the feel of a holiday in beautiful nature I came up with the idea of adding the northern lights as a backdrop for a befriended couple in the camper.

Although I have lots of skies and landscapes in my personal stock, I had no northern lights shots. The don’t occur on our latitude, so I would have travel to Norway to shoot it. I could have bought a stock image, or use a “creative commons” image from Wikimedia, but I would rather make it myself, just for the sake of the fact that the whole series was made by me.

So, instead, I searched for clouds more or less in the shape of these northern light flames and transformed them in post, changing the color and stacking several clouds in different opacities, some with motion blur, to get a sky as shown. When flash is used, it was a Godox AD360 in a softbox, always with a 1 CTO warming filter to imitate tungsten light.

A big thank you to Roelof for sharing these images and the story behind them. To see more of his work and browse the entire Lockdown collection, visit his website or by giving him a follow on Instagram.