Amateur photographer Santiago Olay has an interesting day job: he works as a deck officer on a 280m cargo ship. But when he’s not busy with his duties, often late at night, he goes out on deck tries to photograph the Milky Way from the middle of the ocean.

Olay reached out to us after seeing some of our recent coverage of beautiful, bioluminescent phenomenon. He, too, has captured these kinds of images as the ship carves through the ocean: 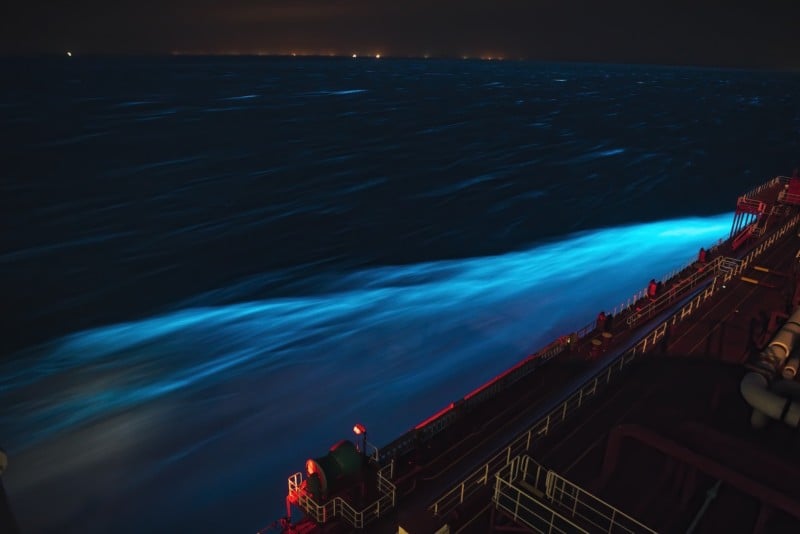 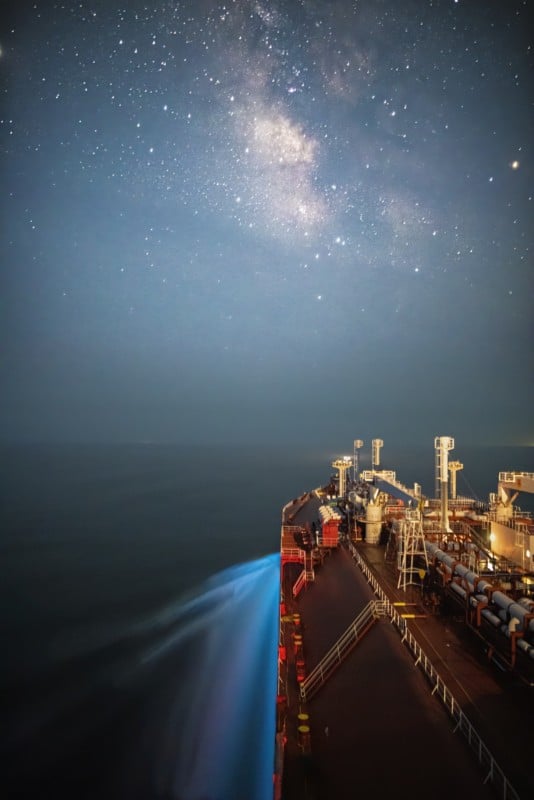 Almost as an afterthought, he also mentioned that he tries to capture the Milky Way as well, though it’s incredibly difficult because, remember, he’s on a moving ship.

Both types of images, but especially the combination of the two above, caught our eye, and we asked Santiago to tell us more about how he goes about shooting these kinds of images. He calls himself an “amateurish picture taker,” but it’s amazing to see what he’s been able to capture while dealing with a moving ship that’s also vibrating at the same time.

Photographing the Milky Way from a Cargo Ship

I’m a deck officer currently embarked on a 280 meters long ship, and a very amateurish picture taker. I’d always liked to take pictures since I bought my very first Nikon FE2 many years ago. I just recently jumped to DSLR, but I’ve been using digital point and shoots since about 2007.

Since joining this tour of duty I started sharing one nice picture a day with my relatives and friends in Spain trying to alleviate the very real sense of confinement we are all feeling due to COVID-19. If they have to stay at home, at least I can help them ‘travel’ through my pictures, I thought. I also like it because it pushes me to try to get some nice pictures every day.

When it comes to the Milky Way snaps you have to bear in mind that is a little bit tricky to capture from a moving ship due to the rolling, yawing and pitching movements inherent to vessels. Vibration because of the propulsion is also a problem, especially at some specific RPMs.

The way I deal with it is basically trying to wait for good weather conditions and also taking usually 100+ pictures every session and then trying to choose the best one. Sometimes, I have to discard all of them but then other times I can get many keepers. 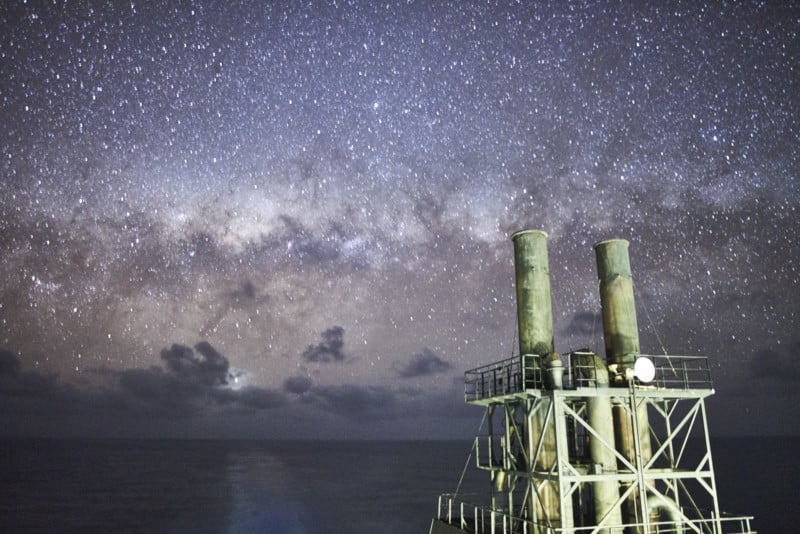 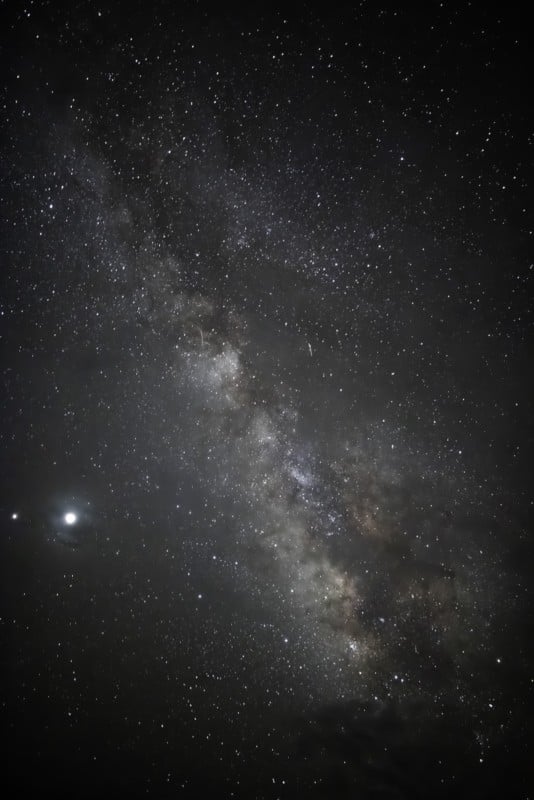 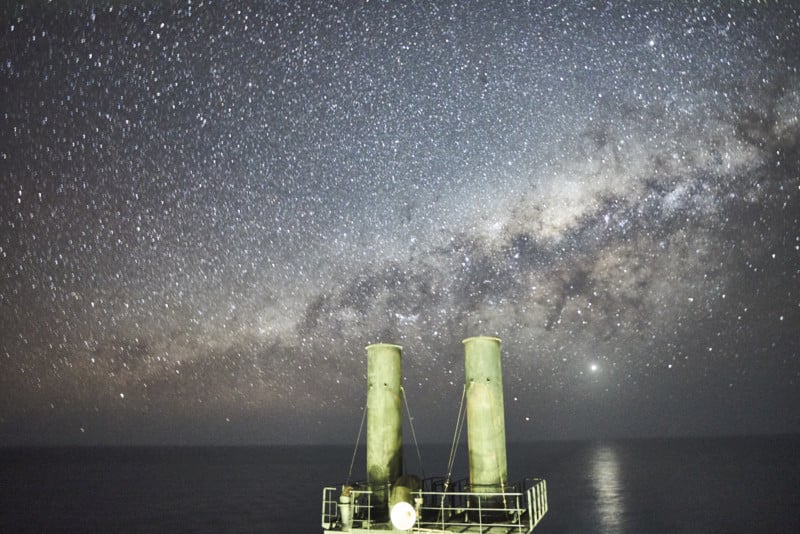 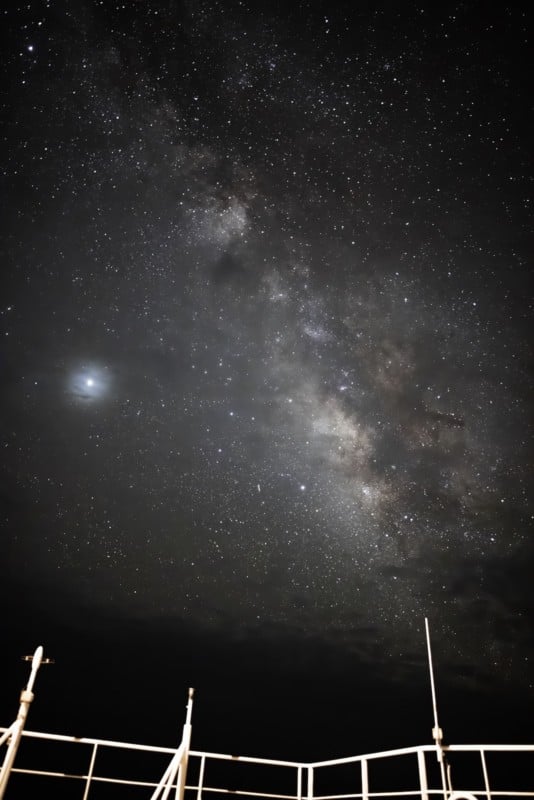 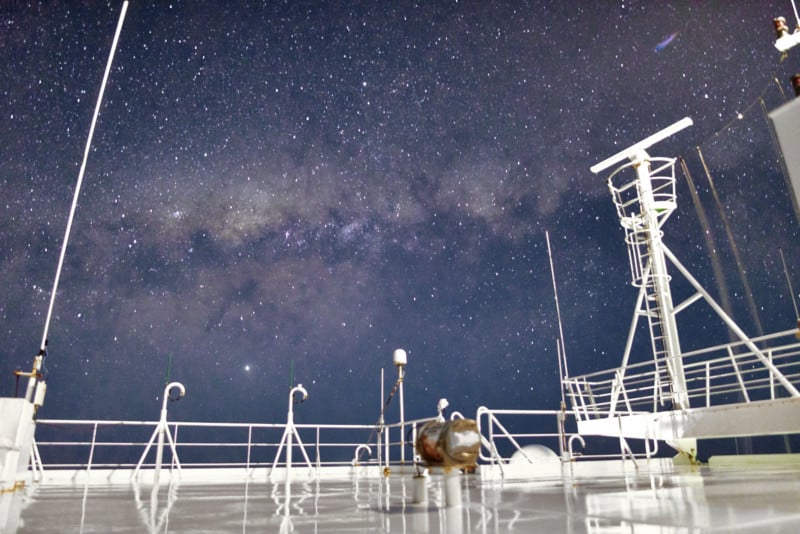 I’m usually shooting with my Nikon D750 at ISO 12800 and shutter speeds in between 3 to 20 seconds, depending on the weather and clarity of sky. I mostly use 3 lenses: a Samyang 24/1.4, a Tamron SP 35/1.8 and, to lesser extent, a Nikkor AF 50/1.8D, almost always shooting wide open. To minimize the shaking of the camera I found almost all of the mini tripods ineffective, until someone recommended the Cullman Magnesit Copter, which is quite sturdy.

It’s still not enough though. I usually grab the camera and tripod with both hands in order to dampen the vibration.

Since I’m onboard a ship that carries dangerous cargo I always make sure to shoot from a non hazardous area (we have a plan marking them) as well as using a portable gas detector. Otherwise I can use an ATEX camera that we have onboard for such matters, but quality of the pictures is only good in daylight. 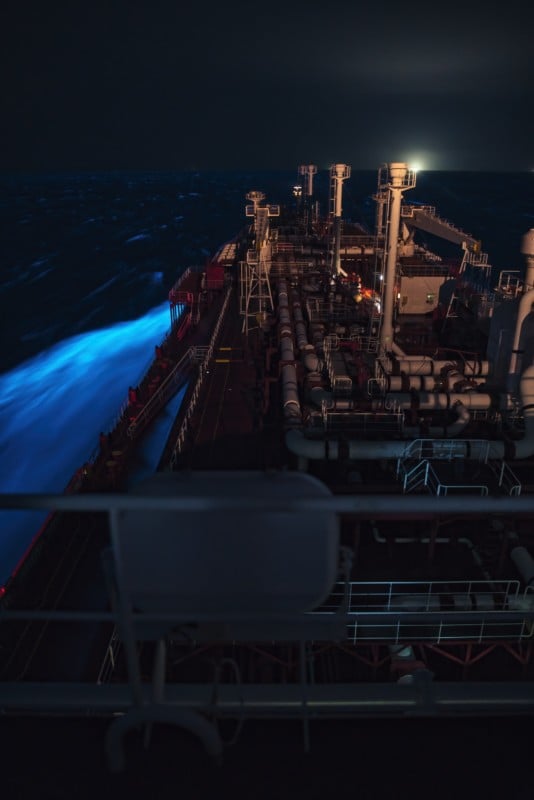 The bioluminescence usually happens in waters that are rich in nutrients, as the phytoplankton is producing that glow. Some places I’ve experienced it to be quite bright as for example in the Gulf of Oman and the Bight of Biafra. For clean skies it usually helps to be in cold waters so atmospheric moisture is low. As we usually do oceangoing trips, the light pollution is almost never an issue.

I would like to hear if there are any other astro-ship-photographers out there, and inspire people to take out the cameras and shoot. Stay safe!

A big thank you to Santiago for sharing his experience and photos with us! If you’d like to see more of his work, and keep up with him as he continues to try and improve his skills while sailing for adventure on the big blue wet thing, give him a follow on Instagram and Twitter.

And if you’re a seafaring astro-ship-photographer like Santiago, drop him a line in the comments!

Balancing Photojournalism with the Right of Refusal: The Debate Continues