When capturing the “subjects” for his video, Smith purposely avoided the “stereotypical” flying insects that you’ve probably already seen on camera, like butterflies, bees, or the common fly. Instead, he collected only “the weird stuff.” Insects whose flight has, to his knowledge, never been captured in slow motion before.

These include (with time stamps):

Of all of the above, the best of the bunch have to be the Painted Lichen Moth and the Rosy Maple Moth. The first looks like a watercolor painting with wings (see above), while the second, to quote Dr. Smith, looks like “a flying muppet.” No… really.

“It doesn’t jump or roll its wing tips up like the others, but honestly, who really cares,” says Smith. “Just look at it! It’s clearly the best moth. It looks like a flying muppet. Like after it flies off screen here, it’s probably gonna go back to living its life on Fraggle Rock.”

This screenshot doesn’t really do it justice. You’ll really want to watch the video to get the full effect: 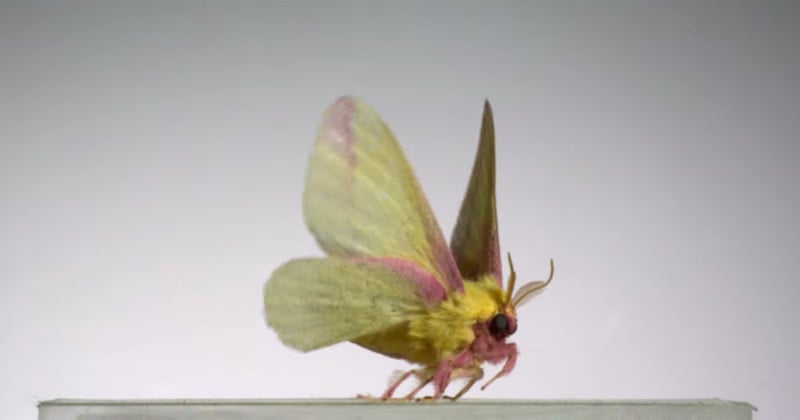 But it’s not just about showing some cool footage; Smith takes the time to dive into some of the research on insect flight, how it might have evolved, and explain why and how the flying styles between the various insects above differ.

To see some never-before-seen footage, learn a few things, or if you’re just looking for some mesmerizing slow motion macro to fill your Friday, check out the full video up top. And if you want to see more from Dr. Smith, check out his slow motion video of ants injecting venom at 1,000fps, or visit his YouTube channel for lots more cool stuff.

‘Where Did You Shoot That?’