The compact Ricoh GR series is a favorite among street photographers, and it seems the company has finally decided to lean into that reputation. Earlier today, Ricoh Imaging unveiled a “Street Edition” of the Ricoh GR III, with a bright yellow ring around the lens and a couple of exclusive accessories.

Releasing special edition cameras is usually Leica’s move, but Ricoh has good reason to release a “street” version of the GR. We’re just not sure they did it right.

The camera mainly distinguishes itself from the regular GR III by its metallic gray finish that’s meant to evoke “the asphalt pavement in the city,” and the bright yellow/orange ring around the lens that’s “reminiscent of traffic lines painted on streets.” The only other thing that sets the “Street Edition” apart is the inclusion of two accessories—a detachable viewfinder and a genuine-leather hand strap—but these will only come with the Street Edition “Kit” that will ship in limited quantities.

The regular “Street Edition,” launching in Autumn of 2020, is just a GR III with a new paint job and a Special Edition graphic that will be displayed on the rear LCD. 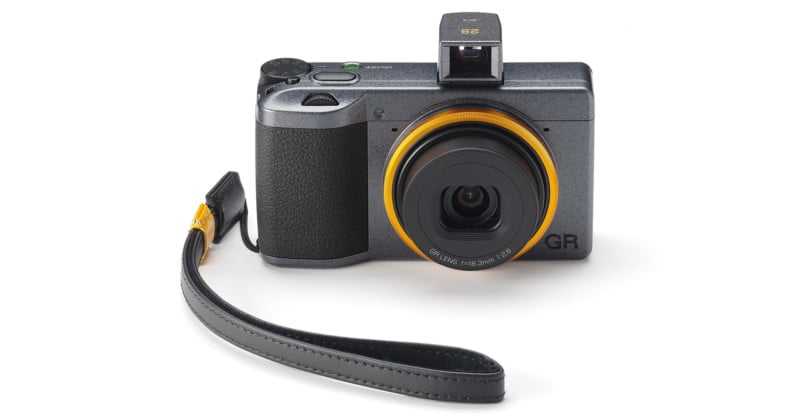 To be fair, it’s not all form over function. The metallic gray finish apparently also features a “grained texture” that improves grip, and there’s a “full-press snap” feature coming to the street edition first. This feature allows you to focus on a specified distance and shoot with one tap, but it will be added to the regular GR III via firmware update after the special edition is launched, so it’s really only a launch exclusive.

Even with these “special” features, the decision to create a street photography version of the GR that’s actually more conspicuous than the regular camera feels like a missed opportunity—the choice to create a status symbol, rather than adding any functionality street photographers would actually prize. Then again, what is a “special edition” camera if not a status symbol.

Only 3,500 of the Ricoh GR III Street Edition Kits will be sold, and they’re available to pre-order now for $1,200 (the regular GR III costs $900). No word yet on pricing of the Street Edition camera-only launching in the Fall.

To learn more about the Street Edition GR III or order yours, head over to the Ricoh website.

Unsurprisingly, Images That Mirror Life During COVID-19 Surged in Popularity This Year