A few months ago I found out about the upcoming Google Licensable badge. Provided you embed the required metadata in your image files, it’s a label that will be added to your photos in Google Images, with links to a page that includes your Web statement of rights and a link to license the photo.

It’s the best thing that’s happened to photographers in a long time. It will empower us to be better connected to, and have more control over, the photographs we put on the Web. With any luck, it may even help us make money.

It’s also quite simple to set up. The required metadata fields to invoke the badge are: Web Statement of Rights (sometimes called Copyright Info URL) and the Licensor URL. In addition, as a best practice, you would also use Copyright Notice, Credit, and Creator (know as the three “C’s”) because these fields also come up in Google Images.

This should, in theory, be easy to prepare for and take advantage of. But as my daughter recently found out, it’s anything but.

My daughter, Anna, is a photographer living in Brooklyn. She was excited to find out about the Google Licensable badge, and set out to redesign her Squarespace website to be ready for it. She undertook the project in early April, during what has become a long and scary quarantine.

In mid-April, Anna bought a year’s subscription to Squarespace because it was 20% off. She picked out a new theme, made tweaks, wrote her “Web Statement of Rights,” uploaded new image files with the required metadata, and arranged her photos in portfolios. She spent a lot of time on it, only to find out that some of her CMI metadata was gone the second she uploaded an image—as a result: the photo would never invoke a Google Licensable badge.

Photo metadata is considered copyright management information (CMI), and the removal of CMI is a U.S. Copyright DMCA violation if you can show that the party that removed it could reasonably expect that the removal would induce, enable, facilitate, or conceal infringement. But ever since this law was enacted 22 years ago, it has been hard to prove that CMI removed from digital files was removed on purpose to facilitate copyright infringement and, as a result, platforms with content management systems (CMS) that automatically strip CMI seem to be off the hook.

Take Instagram for example. The image sharing site strips the CMI out of your files, and through the open tap of Instagram’s public-private API feature, these files show up on countless unauthorized mirror websites that look very similar to Instagram. As a result, these high-res photos sometimes show up on Google Images without your name or your copyright notice in the image file.

Hence, your photos are on their way to becoming orphan works, and you have lost your authority over your images, not to mention any possibility to make income from them.

The same thing happens on Squarespace. When you upload a photo, the website’s CMS will strip out your copyright notice unless you know to check the “Enable Image Metadata Importing” button before you upload. But even switching that on only saves some metadata, not all. Squarespace’s CMS still strips out all of the XMP metadata, which includes the Licensor information.

So Anna’s photos on her Squarespace website will never display the Google Licensing badge in Google Images until and unless Squarespace makes that necessary changes to their API, and Anna uploads the photos again. 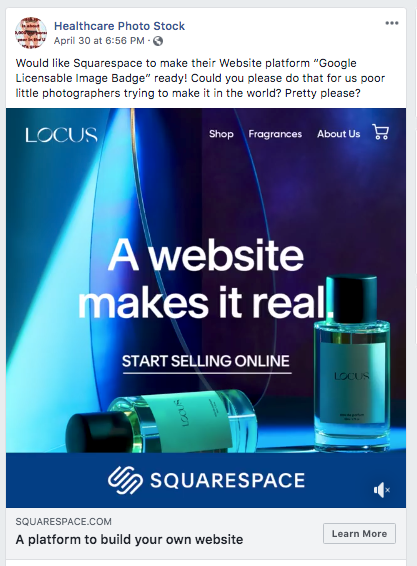 I have a WordPress website, and just before I updated my own photos for the Google badge, I read up on metadata and learned a lot from the public iptc-photometadata forum, the same forum where I learned about the Google Licensable badge in the first place. Some of the members on this forum actually “wrote the book” on metadata and initiated the photo metadata standards for much of what we have now.

Armed with more knowledge than I ever thought I needed to know about metadata, I contacted Squarespace customer service via their website. While waiting for a reply to my first message, I initiated a chat in which I fully described the problem so that they could read it and respond when they entered the chat.

The first rep did not know much about it, saying only that, “this is not something that we would do” and that it “sounds like an issue somewhere.” He said he would look into it, responding later with an inconclusive email.

Meanwhile, a different rep replied to my first message, asking me to send the image file for them to take a closer look and giving me hope by saying that, “I can send this as a feature request to our developers.” Two days later, a different rep followed up, saying, “I’m going to escalate this ticket for review. We’ll reply back to this ticket directly with more information as soon as possible.” At the same time, he warned me that it may take a several days, and that I could not reply to that email—if I wanted to get in touch, I had to start an entirely new ticket.

I patiently awaited their reply, which came two days later:

I can confirm it is not currently possible to import the metadata you are looking to keep.

I understand that with the launch of this new Google feature (I see it is still in Beta), it would be very useful to have more information import along with the images you upload. I will pass this request on to our Products team as a Feature Request.

Still hopeful, I followed up after another 10 days. They responded by telling me how busy they are in the customer service department due to COVID-19, and that “we have not received any specific updates as to when or if this functionality will be implemented on our platform.”

They did, however, leave me with a glimmer of hope: they said that “feature requests are often approved based on the volume of requests we receive. So, if you know anyone else who uses Squarespace and would like the same feature, you can encourage them to write in and let us know.”

Which is how we got here. I hope this post will inspire photographers everywhere to pressure their website providers to include all of their photo metadata. If you can, please contact Squarespace and say, pretty please, to stop stripping the copyright data from our photos. 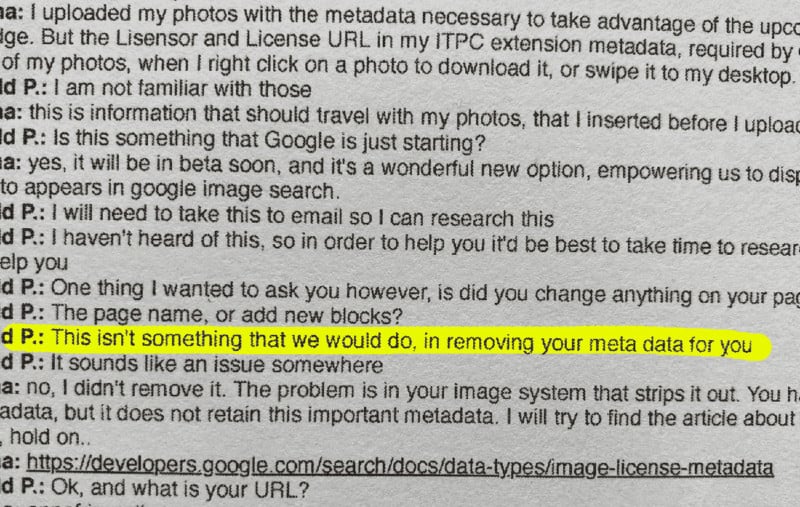 After nearly a month and six different reps in the Customer Service department, I haven’t gotten very far. Along the way, I also discovered that Squarespace has partnered with Getty Images to sell $10 stock photos to their subscribers. I certainly hope this isn’t deterring Squarespace from implementing the retention of our embedded metadata, as if those with the Google Licensing badge might somehow compete with Getty for stock photo sales.

20 years ago, we photographers hoped for a better, more equalizing Internet future—a chance to level the playing field. But during the past two decades, so-called ‘Big Tech’ has become the all-controlling monster of the Internet, with little if any regulation, slowly but surely diminishing all hope for individual photographers, keeping us from utilizing the very tools created for us in order to help us make a living online.

In 2020 I see Google as a glimmer of hope to try to level the playing field, but we can’t even get to first base because we are cut off at our knees. Hopefully the community can rally together and do something about it.

About the author: Penny Gentieu is an award-winning photographer and the founder of BabyStock, one of the first single-photographer photo licensing websites in the world. You can find more of her work on her website, blog, and BabyStock.com.

My Unnatural Interest in Cracks