One of the many fascinating effects of cross-polarization is called “birefringence”, which is responsible for the psychedelic gradients in the seen here.

This article is part two of a two-part series explaining cross-polarization and birefringence. The first part can be read here. 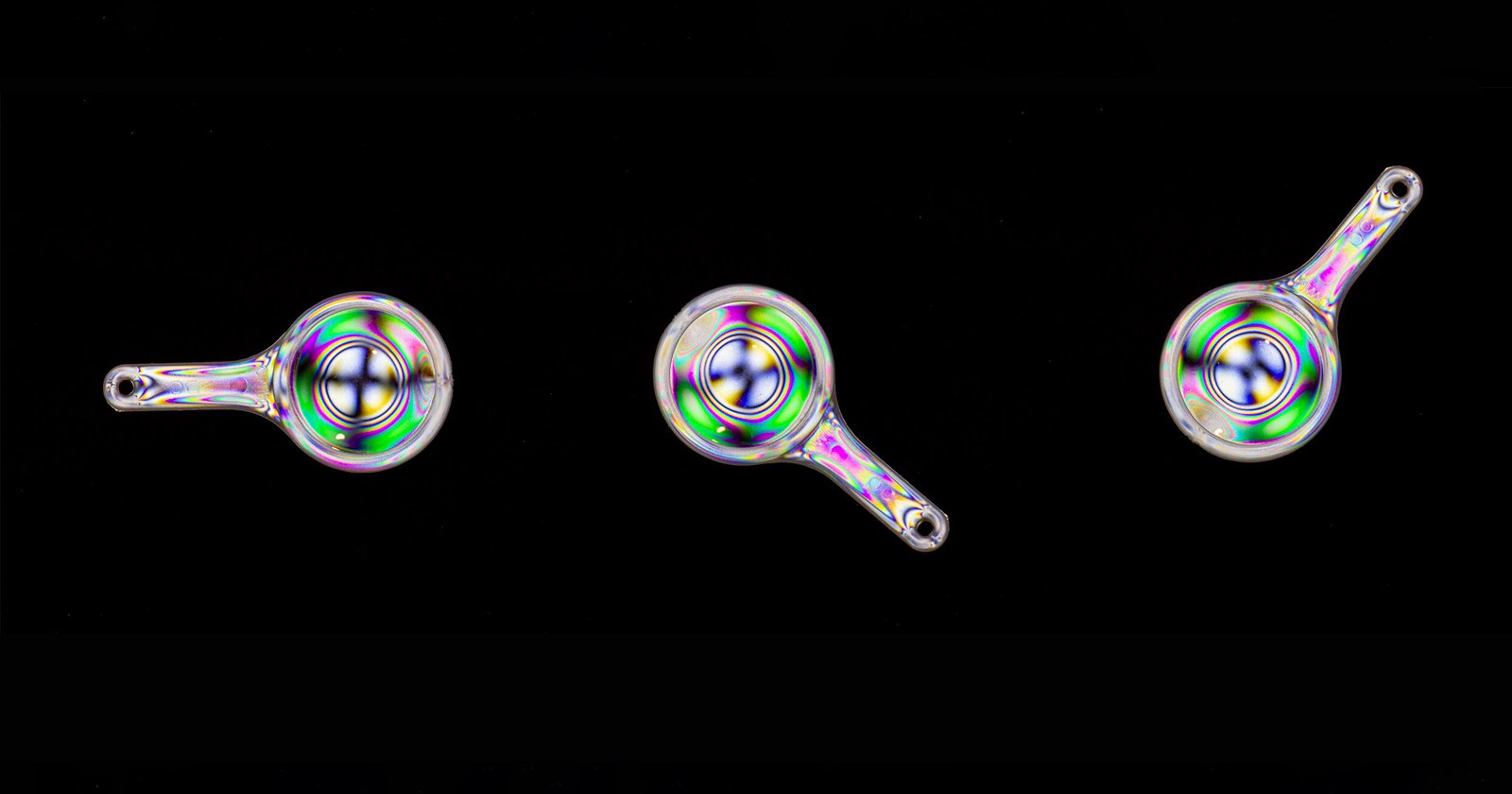 What does “Cross Polarization” mean?

While we delve deeper into this issue here, let’s recap: Cross polarization is a technique that allows us to virtually eliminate specular highlights from images by using polarized light, but it also holds a lot of creative potential as it can be used to bring out eye-catching rainbow gradients in subjects such as plastics, ice, and certain crystals.

In some industries, this technique is used to locate areas of stress in plastic, but it also holds a lot of potential for interesting macro images: 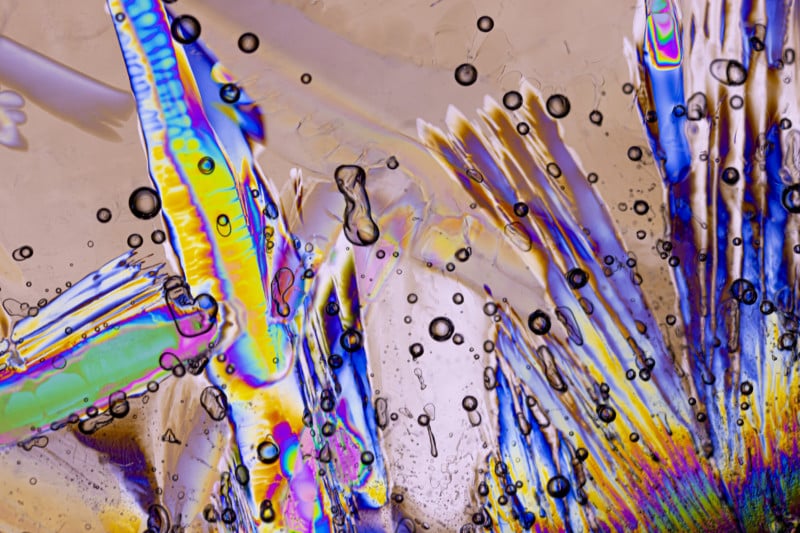 The image illustrates the molecular structure of some thin ice. Which colors these structures take on depends on the orientation of the polarizer in front of your lens. The photo was created by freezing water on a polarizing filter, which I then placed on a flat and even light source (in this case a repurposed notebook).

The two polarizing filters in the set-up above are oriented in opposing directions. This would cancel out all light as the CPL filter under the ice polarizes the entering light.

As the light enters the ice it gets doubly refracted which causes the original light ray to split into two rays that travel in different directions according to the refractive index. Both rays are still polarized. As one wave gets retarded with respect to the other, interference occurs between the waves as they pass through the second polarizer.

This phenomenon is called birefringence and it is responsible for the gradients of color in the images above.

Which colors these gradients take on depends on the orientation of the polarizers in relation to each other:

Also noteworthy: the best results will be achieved with linear polarizers.

Using only one Polarizer

To experiment with this without having to purchase an additional polarizer you can simply use your computer screen instead. Due to the way that LCD displays work, they emit polarized light so all you need to do is to load an empty word document or a white wallpaper and you can start exploring the effects of birefringence at home.

Just try to hold a CPL filter in front of your computer screen and you will see how it’s blocking out varying amounts of light, depending on the angle of the filter:

You can start exploring the effects of birefringence by using a computer screen for your light source and just a single CPL on your camera lens.

Experiment with different sets and subjects

But not only translucent subjects such as plastics, ice, or crystals are capable of producing fascinating colors under cross-polarization: even the human iris will create interesting gradients of color when illuminated with polarized light and viewed with a second polarizer. 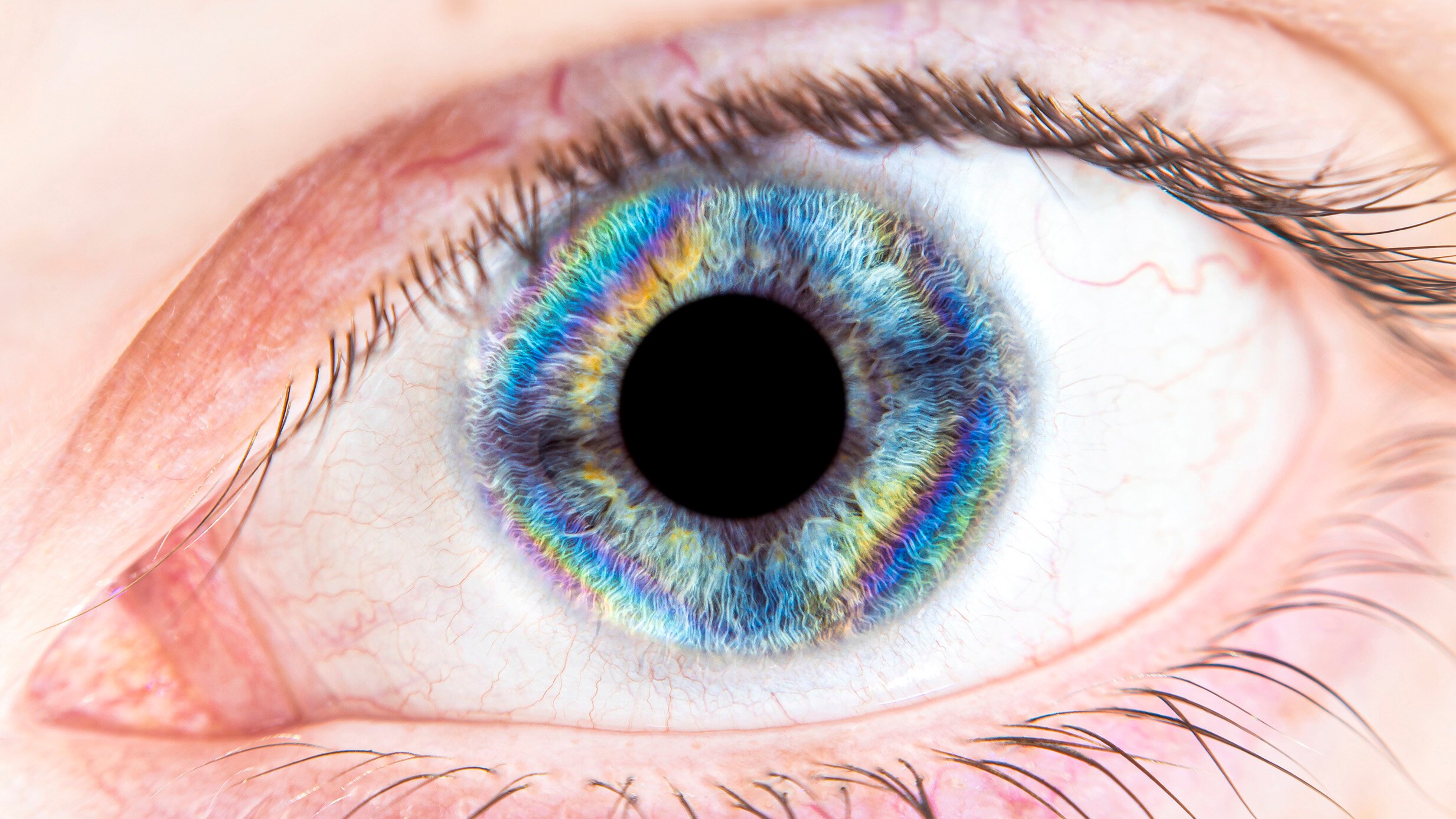 To have a look at my set-up that I used to capture the iris image above, please have a look here: 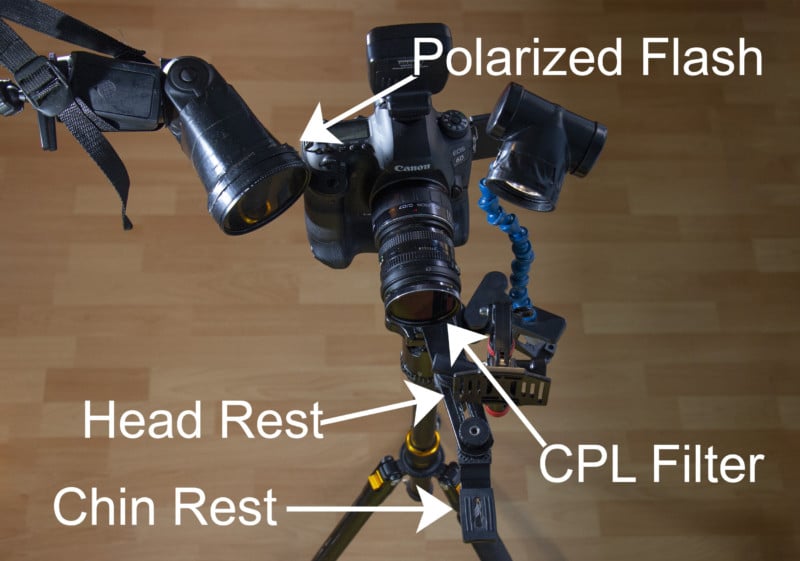 I had previously noticed some rainbow-colored highlights in my own (brown) eyes, but not really quite enough to leave me just as stumped or fascinated as I was upon discovering such colorful gradients on my camera screen:

A bit more research and some further testing with two sets of brown and two sets of blue eyes revealed that this effect related to the color of blue eyes. Brown eyes have an additional layer of melanin which sits on top of the iris. The darker the color of the iris, the more of the pigment is present. This additional layer is the reason why such gradients won’t show up in brown eyes.

Even though I have a basic idea as to the reason for this phenomenon, I am admittedly not quite certain of the physical process that causes these colors to show, so if you can explain the science please share your knowledge!

About the author: Maximilian Simson is a photographer and artist based in London, Ontario. The opinions expressed in this article are solely those of the author. You can find more of Simson’s work on his website and Facebook. This article is a combination of two stories also published here and here.

How I Made a DIY Gobo Holder for Studio Strobes

How to Create Photos of Miniature Worlds Using Household Items

Shooting Fashion Photos of Strangers on the Street