Multiple companies are apparently trying to solve the selfie camera notch problem in various ways. Oppo has a design they could implement as early as this year that allows a single pop-up camera module to capture photos both forward and backward out of a single unit using mirrors.

The images here are renders that LetsGoDigital commissioned from Jermaine Smit, also known as Concept Creator, using the patent specification and show in detail how the concept would work. The pop-up module would use a light path deflecting mirror, similar to a design that Xiaomi has patented but arguably more advanced. Xioami’s design only uses one mirror while Oppo’s uses two which are arranged in the shape of a triangle. That system reflects light paths as needed to change the direction that the two cameras can capture. 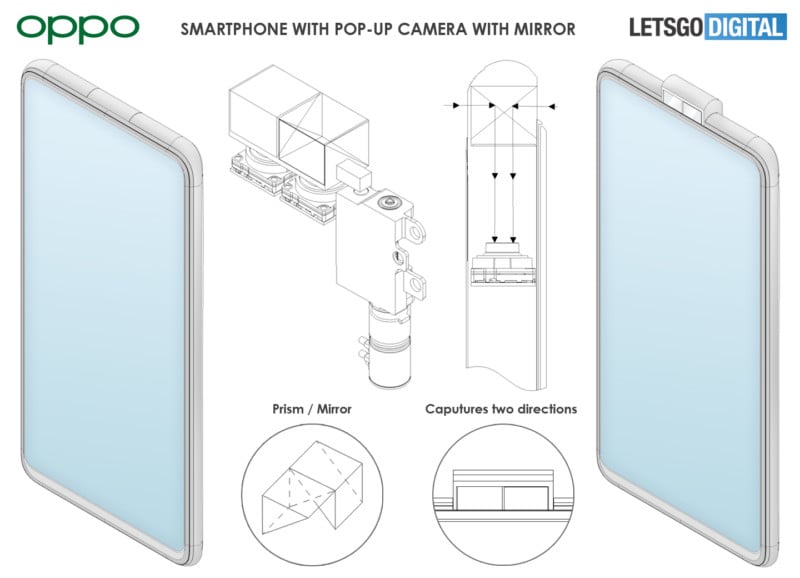 With this design, only the reflective unit moves up and down and the cameras remain stationary.

The cameras are facing up. The pair of mirrors/prisms are positioned perpendicular to the cameras and can be tilted to change the direction of photography. Oppo takes various options into account. For example, Oppo can decide to use one of the two cameras to take selfies. Both cameras are then used for regular photos.

The desire to find a way to get around the front-facing camera cutout as well as the “camera bump” on the backsides of smartphones appears to be very strong, as multiple companies from Samsung and Vivo, to Xiaomi and Oppo are all patenting different ways to try and solve the problem. Pop-up cameras have typically been fragile and prone to failure, so it’s unclear why it remains a popular solution among companies, at least in early patent designs. Few manufacturers actually produce devices with pop-up cameras though, which remains the strongest indication that there is not a lot of faith in the design choice. Still, a solution that simultaneously solves the rear camera bump, as well as the front-facing camera cutout, is perhaps more worth the risk than a pop-up system that only addresses one.

These physical design patents may end up being unnecessary as far as the rear camera array is concerned, however. Recently, new startup Metalenz claims to have solved the camera bump problem by removing the need for traditional lens arrays.

Image credits: Mockups and blueprints by LetsGoDigital, and used under publication guidelines.