A travel photographer from Colorado took several weeks of traveling solo, living out of his car, and shooting to recharge and prepare for a career and life change.

Alex Armitage is a Denver-based travel and adventure photographer who recently took the plunge and left his University job of nearly 8 years to pursue YouTube and landscape photography as a full-time career.

Having started out as a photographer who was happy to shoot anything and everything, he first began to focus on the live music scene in Florida until he took a trip to Yosemite in 2012 and discovered his love for the “practice of landscape photography.” A few years later, when travel media became more popular on Instagram, Armitage found inspiration in seeing other photographers go out and share beautiful images, which gave him another push to travel and pursue this himself.

Armitage has been intently focusing on travel photography for the past four years and now, having left his university job and just returned home after a three-week-long solo shooting trip, can “confidently say there is no better feeling than waking up for sunrise, staying out late for sunset, and losing sleep photographing the Milky Way.” 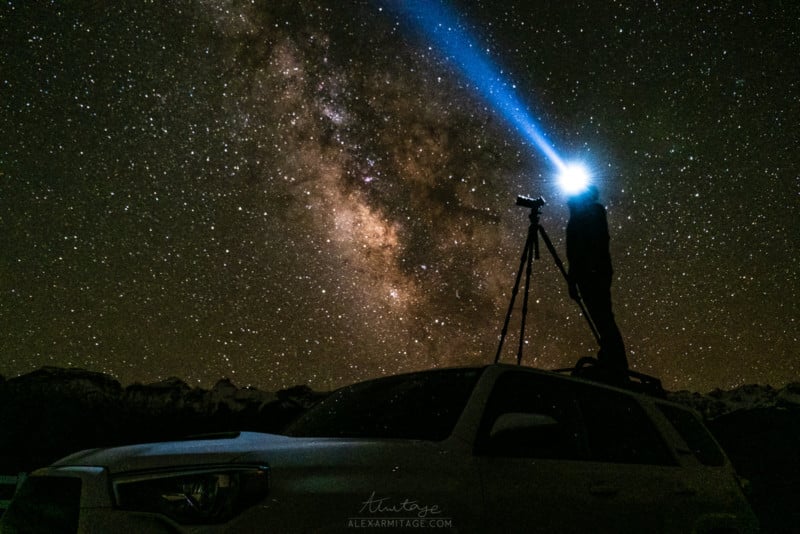 Preparing for the Trip

The several-week-long trip Armitage took just recently wasn’t merely for just photographing landscapes and creating portfolio-worthy content for his work. For Armitage, the journey meant a lot more: it was an opportunity to mentally reset and have time to breathe, after overcoming certain personal changes in his life, and was also a chance to combine the trip with visiting his family.

The photographer was quite excited but also nervous about the trip ahead, he says. He worried he wouldn’t have everything he needed or that he would forget a specific camera charger. Although most things could be picked up en route, he didn’t want to find himself in the middle of the desert without the right Canon charger and miss out on the opportunities the landscape gives.

As a meticulous person who tends to prepare “a bit too much,” which can be both a blessing and a curse, Armitage says that he spent far too much time figuring out what exactly he might need for the trip. He spent time researching advice and suggestions from other “van-life” sources, such as, “how do you wash dishes without wasting a bunch of water?” Turns out, the trick is to pack a spray bottle, filled with half of water and half of vinegar, which did a good job throughout the trip.

Armitage built a bed platform in his Toyota 4Runner that helps separate and house his equipment and personal belongings and also allows him to sleep on top of it. Using a YouTube guide from a photographer Nick Carver, Armitage followed the tutorial but intends to decide on a more permanent solution in the future to allow him to move into his SUV permanently.

Armitage doesn’t use a large kit for his photography — he packed a Canon R5 with Canon EF 16-35mm f/4L IS USM and Canon EF 70-200mm f/2.8L IS II lens for his landscape photography work, in addition to a few accessories, such as Benro tripod, Wine Country Camera filter system, and one magnetic polarizing filter.

For filming his journey and the behind-the-scenes content, the photographer used a Fuji XT-4 with the Fujifilm XF 18-55mm f/2.8-4 lens, a DJI Mavic 2 Pro drone, and a GoPro HERO8. All of his equipment comfortably fits into a hiking backpack, including the tripods, without forgetting the all-important chargers, cables, and external hard drives.

Driving Across the Country

Armitage didn’t set himself a particular destination goal besides heading west from his home in Colorado.  All practicalities aside, the photographer says that “the only goal was to film content, take photos, and enjoy the experience,” which meant committing to the trip and seeing what challenges and experiences it brings.

The photographer recalls: “I really wanted to leave myself open to simply explore wherever I was or learn where I wanted to go during the trip and thankfully I met numerous people along the way that made suggestions that completely shaped where I went,” including certain spots and locations he knew about but hadn’t necessarily planned to visit until he was reminded of them.

Armitage says he stopped by “too many locations” during his travels, but a few stand-out highlights include the rugged San Juan mountains in Colorado, the vast and dry Utah badlands, and the badlands of New Mexico. The relentless winds of the desert in the first week were equally as memorable.

Another unforgettable moment includes shooting the Milky Way at 4 in the morning, when suddenly a line of glowing dots began filling the sky, eventually reaching from one horizon to the other. This spooked the photographer but once he got service the next day, he confirmed it was actually Starlink satellites heading into orbit. 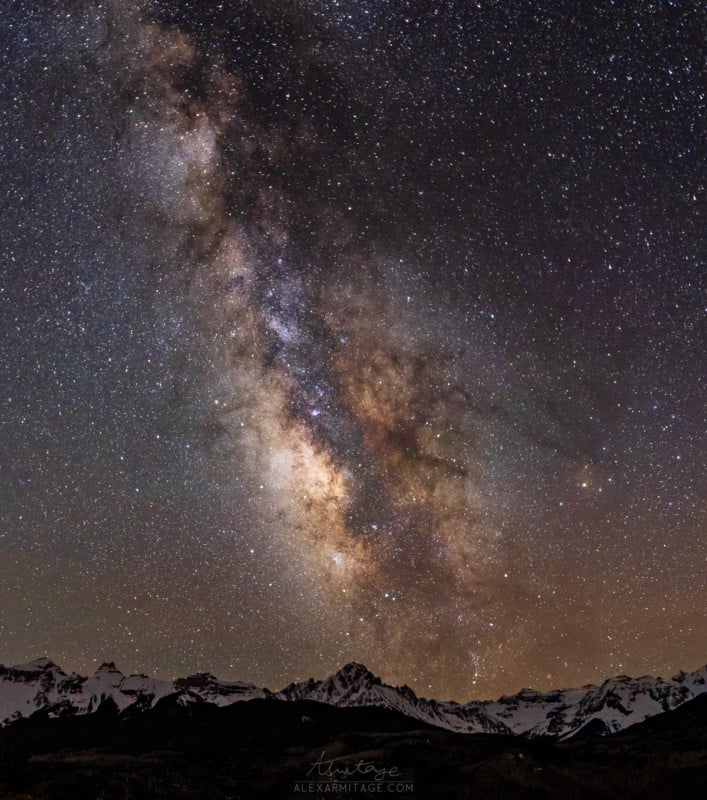 Overall, Colorado and Utah have countless places to photograph and visit, the photographer discovered. The landscape drastically changes from one place to another, even if it’s just 50 miles away from the previous stop, which makes it a great journey for photographers who want to experience variety.

“One minute you’re in snow-covered mountains and the next you’re in the desert,” he says.

Traveling and Living in a Car

Armitage says that, when it comes to traveling solo and living out of your car, the first question people ask is, “where do you shower and how do you use the bathroom?” He found it comparably easy to find places to shower and did that whenever he could, and the same goes for bathrooms. The majority of nights he slept on Bureau of Land Management land, which doesn’t actually have any toilets, but finding restrooms is not difficult if you plan ahead, he says.

The biggest challenge was actually trying to cook in the wind, which sometimes meant the photographer didn’t cook and instead ate whatever he could make without using any heat. The same goes for cell phone reception, which can be difficult to access at times, especially in smaller towns, and even though Armitage enjoys living off-grid from time to time, there are moments when you do need the reception to get certain things done. 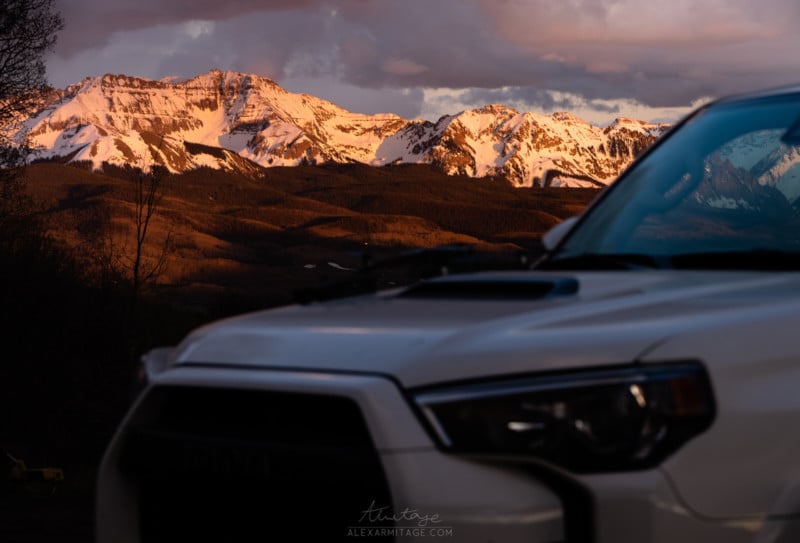 Overall, traveling solo was not something Armitage was concerned about, and he admits that his experience may strongly differ from what others go through because “this is a privilege of being a white male,” and throughout his trip, he met people who had to take additional precautionary measures to ensure their safety “which is a bit unfortunate but also reality.”

“Being alone for me is one of the best ways to clear my head and while it can obviously get lonely, connections are not far away if you ever need them,” Armitage says. “I did meet a new friend along the way and we spent quite a bit of time together exploring new spots while both living in our vehicles. One of the beauties of just finding random spots to sleep and being out there is that you may run into like-minded people that you instantly have a connection with.”

To compartmentalize his own experiences, Armitage has also endeavored on brief YouTube series where he intends to explore this journey of traveling and living out of his SUV, not just as a landscape photographer, but also as a reflective person who soaks in this fully immersive experience, with its ups and downs.

With the first released episode in the series, the photographer hopes that viewers will find something to take away from his documentary-style content and invites others to join in on the journey from the comfort of their screens, whether that is seeing picturesque and raw landscapes or the behind-the-scenes of what it’s like living the “van-life” as a photographer.

Looking Back on the Experience

“The best advice is to prepare for a long trip and then take a short one, not far away from home,” Armitage recommends. Going on a weekend trip will allow cautious adventure-seeking photographers to learn what might be missing or what needs to be adapted to for a long journey in the future.

Equally, a good way to learn and adapt is to just go for it, he says. Going on adventurous trips like these, photographers might unlock a burning desire to incorporate travel in their future lives because “you can only prepare so much and getting out there, waking up for that first sunrise by stepping out of your vehicle, you might not ever want to wake up in a bedroom again.” 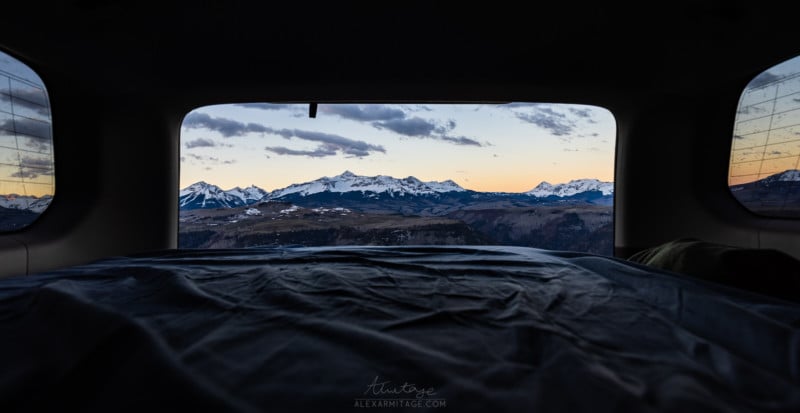 In regards to photography, Armitage discovered an even bigger fondness for his telephoto lens during this trip, even though such a long lens is not traditionally the first choice for landscapes. The majority of photos taken during the trip were with this lens, and Armitage found it to be a great tool for photographing sunrises and sunsets and says that going forward this may become his favorite lens for landscape photography.

As for his personal reflections from the trip, Armitage admits that he gained a lot as a person but it is difficult to put it all into words:

Introspection and reflection come heavily attached to disconnecting yourself from the world and spending time appreciating the beauty that surrounds us. As a photographer – no, as a human, I’m always trying to grow from my experiences. My life hit a big reset button and this trip helped me find where I wanted to land when the dust settled around the events in my life. The fact that I can combine the therapy of being out in nature with my passion for photography isn’t a bad place to start.

Image credits: All images by Alex Armitage and used with permission.

9 Months with the Fujifilm X-Pro3

Thoughts on the Nikon Z6 II for Wildlife Photography