ON1, the software maker behind ON1 Photo RAW 2020, has just released something called ON1 360°: an “end-to-end photography workflow solution” that lets you view and edit your photos across various devices without needing to store them in the cloud, and all for a lot less than Adobe is charging for Creative Cloud.

Originally teased as ON1 Sync back in August, ON1 360° is a cloud syncing service that doesn’t require that your photos live in that cloud. It allows you to sync photos, metadata, photo edits, albums, and catalogued folders between various devices without having to change where they live permanently—whether they’re on your computer, a hard drive, or network attached storage.

You select the files you want ON1 360° to keep track of, and the service gives you access to these files from anywhere, syncing edits between devices so you can use ON1 Photo RAW 2020 or ON1 Mobile on iOS and Android interchangeably. To achieve this, ON1 will create a temporary compressed-RAW version of your selected photos, which is then stored on the 360° cloud. If you want to upload and edit your full-sized RAW files, you can do that too, but ON1 Promises 75% space savings “while maintaining the same tonal and color range” if you used their special compressed-RAW format.

Here’s a quick intro to the service that explains how ON1 360° hopes to be more versatile than the competition:

The point of the service is that it gives photographers control over what they sync, where it’s stored, and how it’s stored. And, as a bonus, you’re only using one application—ON1 Photo RAW 2020 and its mobile counterpart—instead breaking your editing into a separate RAW processor and layer editor… wonder who they’re referring to there.

“Some people like using external drives, and some people like storing photos in the cloud. And some like both,” says Matt Kloskowski, an educator and ON1 Ambassador. “The great part about ON1 360° is that you get to choose where photos get stored while still having access to them on all of your devices so you can share from anywhere.” 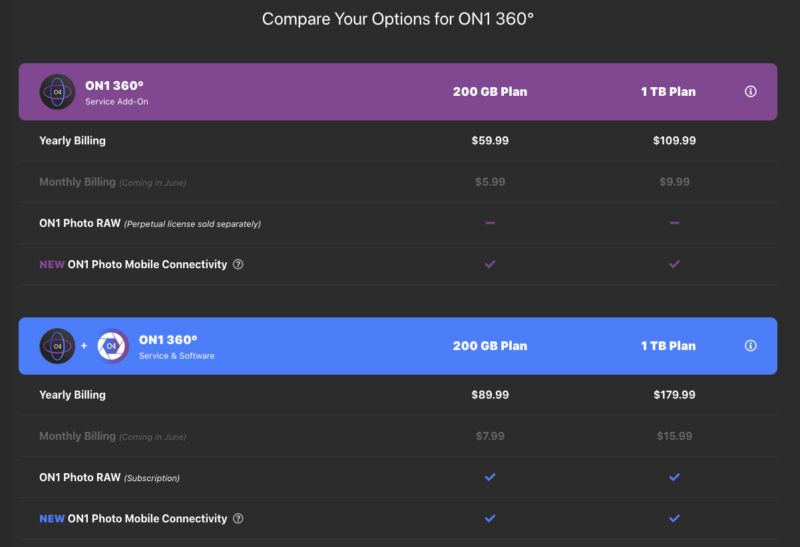 ON1 360° is set to roll out gradually starting today, with a full roll out in June 2020 when “service officially begins and all purchasing options become available”—i.e. that’s when you’ll be able to subscribe on a monthly basis instead of opting for a yearly plan, but at that point a perpetual license of ON1 Photo RAW 2020 will be back up to $100.

To learn more about all of ON1’s offerings or subscribe to ON1 360° today, head over to the ON1 website. And let us know what you think of this new hybrid cloud storage and syncing service in the comments.