Last week, Nikon Japan moved the legendary NIKKOR AF-S 200mm f/2G ED VR II lens over into its ‘Old Product’ list of discontinued F-Mount lenses. And while Nikon USA won’t confirm the news, this probably means that the old lens is no longer in production, and will hopefully be replaced in the near future.

The original news broke through Nikon Rumors, who noticed that the 200mm f/2G had been added to Nikon Japan’s discontinued lens list (translated): 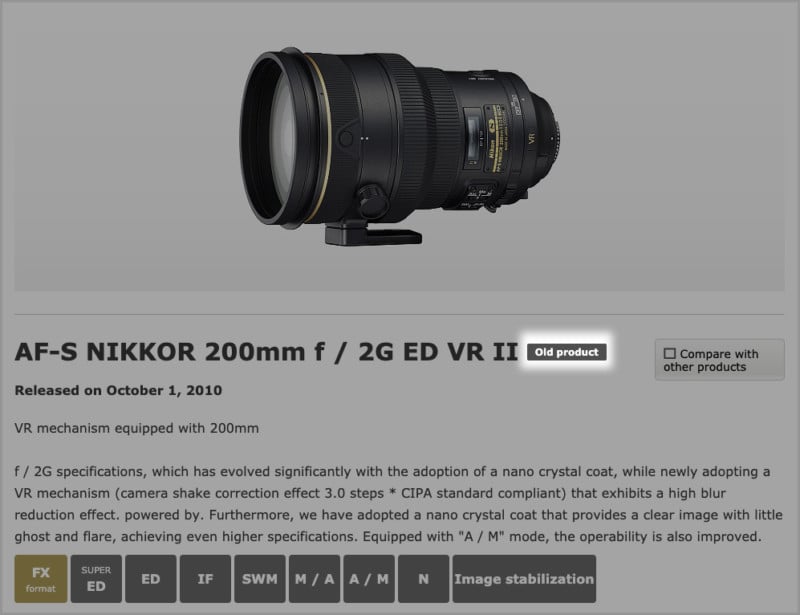 The AF-S 200mm f/2G ED VR II is a phenomenal lens, one of the sharpest that Nikon has ever made. Released almost 10 years ago in October of 2010, it still holds up today despite lacking some of the newer optical technologies like High Refractive Index (HRI) lens elements, and Nikon’s multi-layer Super Integrated Coating (SIC).

And yet, even with all of these disadvantages compared to the latest, most clinical optics from Nikon, it’s still the second sharpest NIKKOR lens that DXO Mark has ever tested, losing only to the new Z-Mount 50mm f/1.8 in that category:

As soon as we heard that the lens had been discontinued, we reached out to Nikon Inc. to confirm—since there may be regional differences, or other details lost in translation—and earlier today we received the following statement:

“The AF-S NIKKOR 200mm f/2G ED VR II lens is available in the United States through NikonUSA.com and authorized retailers.”

This is factually correct. The lens is currently still available at online retailers and on NikonUSA.com, marked as “In Stock & Ready to Ship” for anyone who is willing to drop the requisite $5,700 on this much-beloved optic. But for some reason, Nikon USA is unwilling to confirm what headquarters in Japan has already made clear.

That said, users should probably assume Nikon Japan is correct here. If the lens had been accidentally added to the discontinued list, the error would have been fixed once we asked for comment. Since it hasn’t been, we expect that this lens is indeed out of production, and are hopeful that a newer version—potentially leaked last year—is already in the works.

There is No Delay in EOS R5 Shipments

Stop Focusing on Gear and Specs