Surf photographer Ben DeCamp has captured a beautifully moody series of black-and-white photos of waves using a waterproofed Hasselblad XPan film camera, considered by some to be a “holy grail” camera that DeCamp leveraged for his enthralling panorama-style images.

DeCamp is known for his stunning images of surfers and waves, but his latest series comes after experimenting with panoramic film cameras as a hobby as a means to decompress from his professional work, but what started as a personal project quickly grew into a new passion.

He tells PetaPixel that the inspiration for starting the project comes from the work of photographer Trent Mitchell and his use of the Hasselblad XPan and 45mm lens in Australia. According to DeCamp, Mitchell partnered with fabricator Dave Kelly which opened the door for other photographers to bring this unusual and rare camera into the ocean.

“I watch reruns of Antiques Roadshow on PBS, if that’s any indication to the type of person I am,” DeCamp says. “Since camera collectors consider this a ‘holy grail,’ it only added to the mystique and difficulty in sourcing a clean example to use. A lot of people who shoot with the XPan initially feel lost and frustrated; their typical subject matter doesn’t lend itself well to the panoramic format. Waves, however, fit snugly into the 65:24 wide-screen ratio and take full advantage of the additional resolution. 12,000+ pixel-wide images across nearly two frames of film enable seamless reproduction for billboards, vehicle wraps, and XL prints.”

Before getting to the point where he would wade out into the surf as pictured above, DeCamp first had to assure his camera would survive the trip.

“I acquired the XPan with 45mm and 90mm lenses in 2018 and then worked closely with SPL Waterhousings in San Diego to create a custom-machined aluminum powder-coated case with optical-grade acrylic lens ports,” he says. 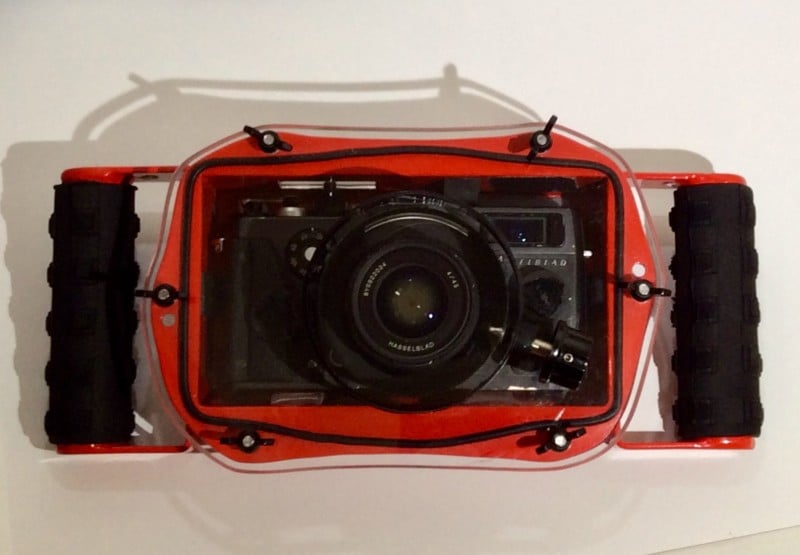 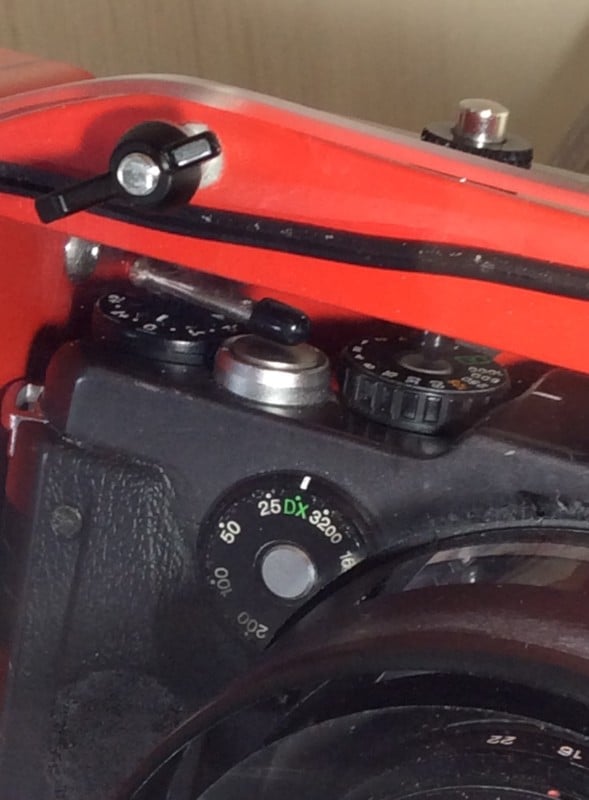 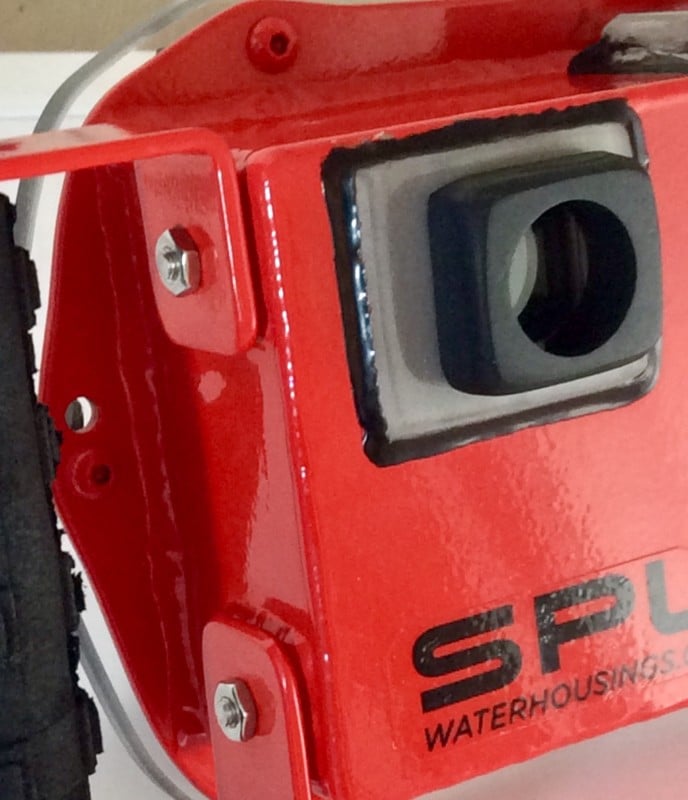 “Since the camera features a motor drive (approximately one frame per second), it kept the water housing design simpler and more compact,” he says. “The catch is you only have 20 frames per 36-frame roll. If the waves are firing one-after-another, or the lighting shifts dramatically, I’ll swim in and quickly change rolls mid-session. The rangefinder functions inside the water housing, but the action happens so fast that I almost always zone focus. The shutter button triggers by a mechanical thumb lever that I can faintly feel through 7mm neoprene mittens. The two handles provide additional security and stability for leveling the horizon.”

DeCamp says that the best times to capture his images also happen to be the least hospitable to being in the water.

“Usually, the strongest storms with the best chances of high surf are in the dead of winter,” he explains. “In New England, there’s snow & ice on the beach with a slim time frame when all the conditions must come together. If you get hurt, sucked out in a rip current, chased by wildlife, there’s no one around who is going to jump in 38-degree Fahrenheit water in a quick hurry. I started wearing an LED light, a whistle, and a prototype emergency inflatable buoy system developed from spare parts around the workshop.

“Storms wash up lost fishing gear, tree trunks, old tires, all kinds of nasty stuff to avoid. I keep a gal. of hot water and a thermos of coffee on the beach in case of a frigid wetsuit flush,” DeCamp says.

“‘When in doubt, don’t paddle out!’” he says, quoting the warning phrase. “But if you have to, be prepared.”

DeCamp says that there is a little-known shipwrecked barge embedded into the beach somewhere around New England. After big storms, on a low tide, parts of it will emerge to the dismay of walkers and fishermen. The boat acts almost like an artificial reef, creating a reliable sandbar that morphs incoming waves into unique shapes.

“Usually, at sunrise and sunset, the ambient light is too low forcing me to open up the aperture and lose all the apparent sharpness from greater depth of field,” DeCamp says. “I often wait till mid-morning for the sun to rise higher and create backlit conditions while still being able to shoot at least at f/11 or even f/16. There’s something special about a backlit East Coast morning, it has a crisp color temperature. But the real magic comes with passing storm fronts. Dark skies and an occasional sliver of light will illuminate the waves. You have to be in the water, Ready in case that moment happens. Often, it does not, and all you’ve achieved is an ice cream headache.”

And then there’s the potato.

“I usually bring a half potato to the beach and rub it all over the acrylic port,” DeCamp explains. “The enzymes force the water to bead off the front. Most photographers lick their lens ports, but you lose hydration quickly leading to muscle cramps. In between every shot I use a squeegee to wipe the port clean of sand and water droplets and allow it to dry in the wind. When you make these little details part of your routine, that’s how you make it home safely with clean photos and if you’re lucky, time to eat the other half of your potato.”

Decamp says that he uses HP5+ film for mixed lighting conditions and TMAX 400 for sunny-day images.

“I typically push +2 in development, and ask the lab to ‘scan for highlight detail.’ Both films have responded well to a variety of graduated ND and color filters for balancing the exposure of the sky. For me, there’s a tangible depth to the mid-tones with HP5+ and TMAX handles the highlights without blowing out. One is dark & moody, the other lighter and ethereal. The result is two distinct black & white looks for the client to choose from.”

As he mentions, DeCamp develops his film through Richard Photo Lab rather than working with it himself.

“I enjoy waiting while weeks pass by without images, and then suddenly there’s news!” he says. “Your entire world stops. The lab also sleeves the negatives and scans the film, simplifying digitization and the archival process while I remain focused on creating.”

For more from DeCamp, make sure to subscribe to his YouTube Channel, and he encourages anyone who enjoys his images to let him know.

“Please reach out if you enjoyed these images, I would love to hear from you,” DeCamp says.

Worth The Bigger File Size?

Trying TikTok Photography ‘Hacks’ to See if They Actually Work