Magnum Photos and prominent photojournalist David Alan Harvey are under scrutiny online today after some of Harvey’s photographs labeled as ‘Teenage’ ‘Thai Prostitutes’ from 1989 surfaced in the Magnum archives, where users could purchase the images or share them online.

The troubling images were discovered by Fstoppers Editor Andy Day, who published his findings yesterday.

“The photographs emerged as part of research into the number of results that Magnum Photos website returns when searching for ‘girl’ and ‘prostitute,’” writes Day. “Several images taken by Magnum photographer David Alan Harvey are part of a body of work entitled ‘THAILAND. Bangkok. 1989. Thai prostitutes.’”

Images included in the series—which has since been completely scrubbed from the Magnum Photos archives and David Alan Harvey’s profile on the site—show several subjects both fully clothed and partially nude. Tags accompanying the photos include the words “Prostitution,” “Breast,” “Asian,” and “Teenage girl – 13 to 18 years.” 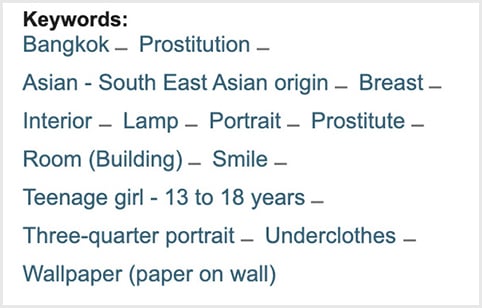 It’s worth noting that the terms “child sex worker” and “child prostitute” are widely discredited as misleading and offensive, since a child cannot legally agree to these acts. If the people pictured are indeed under 18, as the tags indicate, the photos would more accurately be described as showing child sexual abuse or child sex trafficking.

What’s more, Day claims that ANY sexually explicit photograph of a child “constitutes an act of child sexual abuse,” at least under U.K. law, putting Magnum Photos in a very uncomfortable position as the publisher and seller of these images.

In reporting on the growing controversy, we reached out to both Magnum Photos and David Alan Harvey for comment about these photos. A Magnum spokesperson from an external PR agency responded to our request for comment with the following statement:

Like many in the photographic industry, we are re-examining our past archives as we are aware there is material that may be inappropriate. Magnum has accumulated almost one million images over its 73-year history, and we are committed to making this a comprehensive process.

We’ve followed up with Magnum about the image tags specifically, asking why and how tags like “Teenage Girl – 13 to 18 years” and “Breast” came to be added to these photos.

Mr. Harvey has not responded as of this writing, but we will update our post if and when we hear back.

UPDATE 8/7/20: Magnum Photos has declined to comment further on this matter and the origin of the tags.