Matt at DIY Perks recently got his hands on a monstrous, 1500W, single LED that he believes to be the brightest and most powerful single LED unit in the world. But actually getting this thing to work without blowing up or burning itself alive… that’s not so easy.

The LED in question is this 1500W, $1,350 monster from YUJILEDS, and there are two main challenges to actually powering this thing up: cooling and power delivery.

In terms of cooling, Matt built his own custom water block for the LED using an old copper heat sink that he converted into a water tight container using brass plating.

To cool the water, he’s using not one, not two, but four 120mm x 4 radiators stacked one on top of the other, which are then connected in a loop to a reservoir, two water pumps, and his custom-made water block that was fitted to the LED. This should, in theory, serve to keep the LED from burning itself up as soon as it gets any real power.

That takes care of cooling. As for power, Matt had to find a way to deliver 1500W and 30V to the LED without overloading his power solution. His initial setup included two sever power supplies wired in series to provide a total of 2000W of power at 24V. He combined that with six voltage boost boards in order to not just meet, but exceed the needs of the LED on each of its 6 power section.

All that was left then was to power on each individual section … and put on two pairs of sunglasses. This is what it looks like with his hand covering the LED: 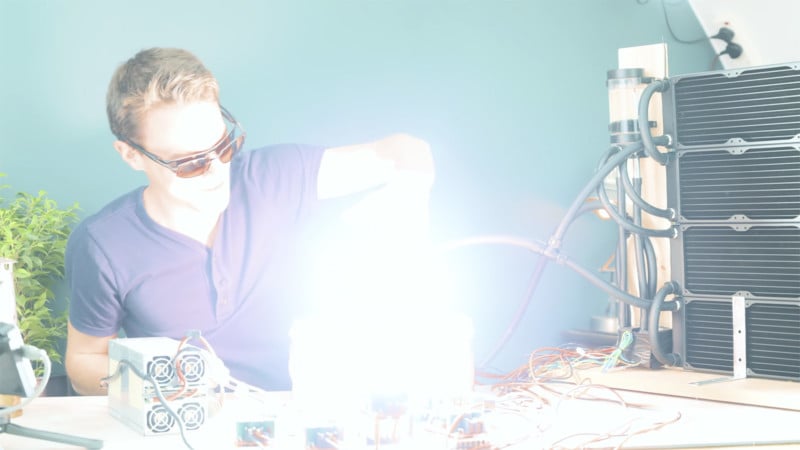 Everything worked as expected—the cooling solution in particular performed VERY well—but unfortunately, the power supplies he was using burned out before he could take the system outside. For whatever reason, maybe because they were wired in series, the two 1000W power supplies just couldn’t handle the 1500W that the LED needed to draw without overheating to the point where smoke actually started coming out.

Check out the full video up top to see the test for yourself. And if you want to see the follow-up once Matt gets his power supply issues fixed, be sure to subscribe to DIY Perks.

How to Create Silly Animations from Old Public Domain Photos