Typically, pinhole photography results are not at a level one would consider professional. But that’s not necessarily the pinhole’s fault. As Henson shows in this video, you can capture extremely high-quality, creative imagery using a proper pinhole camera and good technique. In fact, Henson maintains that you can capture images with a pinhole camera that are impossible with other methods.

In this video, he uses a 4×5-inch pinhole camera and Ilford FP4 film with the addition of an orange filter to cut down the blue in the sky.

In order to capture a properly exposed frame, Henson metered his shot for 100 ISO to compensate for the orange filter, which gave him a reading of 1/15s at f/22. He then converted that reading to an aperture of f/216 to get an exposure of 6.5 seconds. Finally, he used a reciprocity timer to calculate the final exposure, which comes out to 12 seconds for the film he’ll be using.

The resulting print, which is available for purchase on eBay, is titled “Chaos” and it shows a flower bed in Henson’s backyard as seen from below: 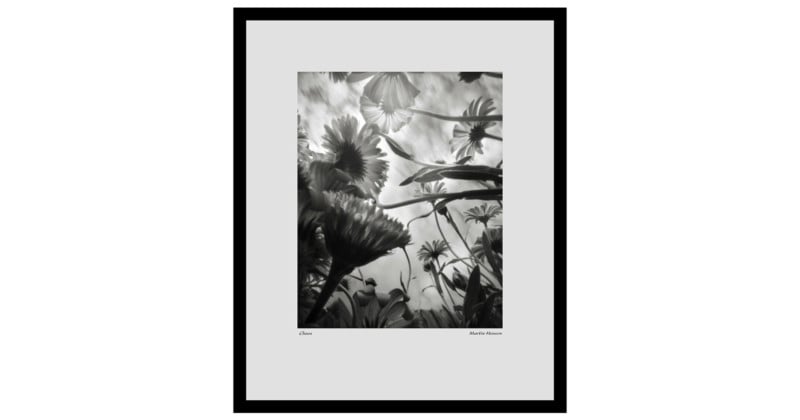 “I think, from this video, two things can be learned,” says Henson by way of conclusion. “You have to experiment with a camera like this to get pictures differently; but it also shows how versatile the pinhole camera can be when used in a different way.”

The end result is exceptional, and Henson does a great job of both instructing and inspiring users to experiment and try something different. Check out the full video up top to see the process from start-to-finish, and if you want to see more, Henson released a video titled “All About Pinhole Photography” last month that is well worth your time.