I’m San Diego-based photographer Daniel Schenkelberg, and in the 1-minute video above, watch as I show you how I captured this face on remote camera shot mid-air.

I am a big fan of running remote cameras as I am a solo shooter and a secondary angle is paramount in one-take situations. Although you can never truly rely on your remote camera to trigger, the photo gods were looking down on me this day and helped me capture some shots I have only dreamt about.

I linked up with 7-time off-road champion and viral video sensation RJ Anderson for this shoot. It helps to have a like-minded client who likes to take risks and push the creative limit when shooting. For this shot, I wanted RJ in the middle of the air off the biggest jump there, a 100-foot+ jump. To achieve this I rigged up my camera to the back of his brother Ronnie Anderson’s Polaris RZR to get RJ face on.

I just brought what I had at the house to rig this up. It could’ve of been done a lot more securely, but I was on a tight budget and no grip places were open for business as this was in the middle of the COVID-19 crisis.

I used one Manfrotto Super Clamp with a Manfrotto camera platform where I mounted my Canon 1D X with my Tamron 15-30mm f/2.8 G2 lens.

I used an Aputure shoe mount ball head which has a 1/4 20 bolt which I then screwed into a Manfrotto double ball joint head. I then added a super clamp to the car roll cage and used the Matthews Over Head grip arm and tightened it the grip head to the super clamp on the cage and the ball joint off the top of the camera. I added a security cable and lopped it through the camera strap loops just in case the rig gets lose and it falls that the camera doesn’t completely fall to the ground.

After testing the shot and rigging to make sure it will hold off the jumps, we decided to roll the dice and send her off the big jump. After review when he returned, the camera was a little too wide for my liking at 25mm. Timing and spacing are difficult with this shot because as the camera car is descending the rear car is ascending so timing and spacing are crucial.

The setting on the camera was 25mm 1/2000th, f/8.0 at ISO 640. Before sending the cars of the jump I set the car to be shot approximately 5-6 feet away on the ground locked focus and taped down the lens. After reviewing the test shot after they jumped the rigging held sturdy and I checked exposure and focus to make sure all was well. I decided to zoom in a little more to 30mm and left all the setting the same.

I was triggering the camera approximately 100-120 yards away. You can see in the raw file me at the bottom of the jump triggering the shot with my Pocket Wizard Plus III. 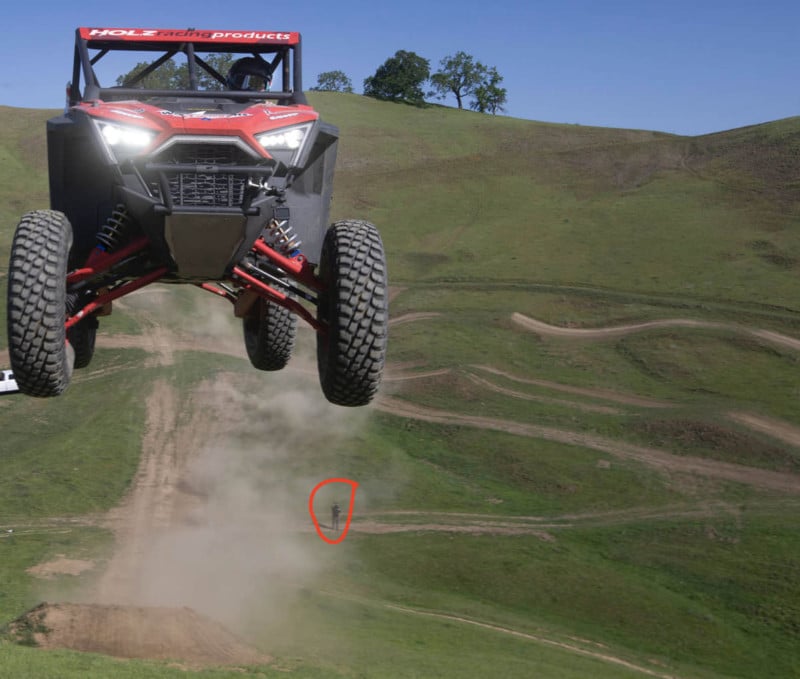 Once he returned and after review, I knew that was the shot — it couldn’t get any better for me. Like I said once before you can never really rely on your remote camera for the shot but when it does capture what you wanted it is a true treasure. I encourage everyone to give remote camera triggering a shot if you have a second camera body just sitting around. Put it into some risky places and capture images like no one has before.

About the author: Daniel Schenkelberg is a motorsport photographer based in San Diego, California. The opinions expressed in this article are solely those of the author. You can find more of Schenkelberg’s work on his website, Facebook, and Instagram.