Somehow or other lens compression effects seem to have hit the zeitgeist. A day does not go by when I fail to see some news photograph critiqued on the grounds of lens compression. Either what it appears to show is fake (or allegedly fake) due to lens compression, or lens compression is concealing some truth. So here’s a little description of it, and a cautionary example.

Lens compression doesn’t have anything to do with lenses. It’s about where you are.

If two things are 10 feet apart, but you’re 500 feet away, they look pretty much the same distance away from you. That is, they appear really close to one another. On the other hand, if you’re 5 feet from the nearer thing, then the farther one is three times as far from you as the nearer one; the farther one is “much further away” even though the two objects in question have not moved — you have.

Lens focal length only comes in to play because to photograph something 500 feet away, you usually want to use a pretty long lens.

The cautionary tale is this: you can’t actually tell how far apart things are from just a photo. You can sometimes tell ratios if you know how big things are (e.g. two people are usually about the same size): this thing is so-and-so further from the camera than that thing. If you then have one or more of several measurements, you can calculate the rest of them, but without any actual measurements, all you have is ratios.

Here are two photos I made just now: 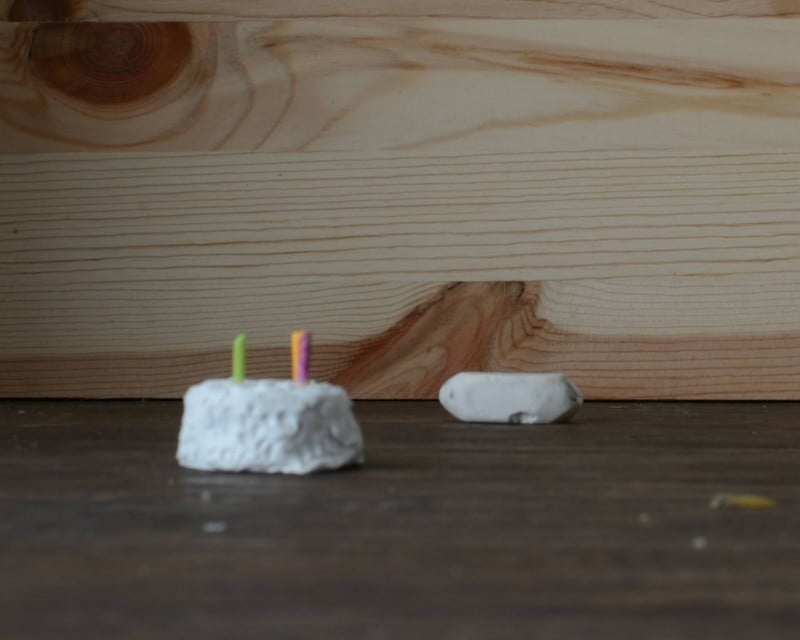 In both cases, the tiny cake is closer than the eraser. In one of them, though, the cake and the eraser are 6 inches apart, and in the other, they are 12 inches apart. The camera is twice as far away for the 12-inch gap, so the same “compression” is accomplished. The ratios between all the distances between this thing and that thing are the same (except, the sharp-eyed might note, the background is a bit off).

While you can, usually, tell from other evidence in the picture that there’s some sort of compression effect in play, one cannot a priori tell much about the absolute distances in play without knowing a little more.

In these pictures, the floor underneath the two objects betrays that there is some front-to-back gap between the two. It is possible that a minute examination of the floor texture would allow you to determine that the gap is larger in one case than the other, but in general this cue is at best difficult to read and at worst cropped out of frame entirely.

So when you see someone saying “the cop is 20 feet behind that guy” take it with a grain of salt. “Behind” might be discernible but “20 feet” is probably a wild guess.

About the author: Andrew Molitor writes software by day and takes pictures by night. The opinions expressed in this article are solely those of the author. Molitor is based in Norfolk, Virginia, and does his best to obsess over gear, specs, or sharpness. You can find more of his writing on his blog. This article was also published here.

Stunning Drone Photos Capture the Beauty of Ballet from Above

Restoring and Using One of the Rarest Cameras on the Planet