The photography industry has been shrinking and the COVID-19 pandemic has not made things any better. This smaller market is being shared by the same number of companies, which could mean some huge changes for the industry. As formats go, Micro Four Thirds isn’t looking strong through this time.

Every so often we tend to see posts about how such-and-such a company is going to die, and nothing happens. Pentax is a perfect example of this. Every year seems to be described as the year of its demise, yet it continues. Ricoh has even released new lenses recently, which has seemingly dispelled some of the fears for the company. Based on this, it would seem odd that I’m writing an article discussing Micro Four Thirds with the same doom and gloom angle.

Well, the reason is that this pandemic has had somewhat of an unprecedented impact on many industries. Companies like Olympus started off by exiting the South Korean market and more recently, Olympus announced it was exiting the camera industry as a whole.

What’s worse is that this doesn’t come as a surprise. Many people were expecting this, and it felt as though it was only a matter of time. This is bad for the industry at large, and the question that comes to mind for many is whether Micro Four Thirds as a format can survive.

The Fall of Olympus

For 84 years, Olympus produced brilliant cameras that garnered a strong following. The last 5 years have not been kind to the industry and unfortunately, it was too much for the company. Sales have been dropping year on year and losses continued to mount. This current pandemic exacerbated the situation and ultimately led the company to sell off its camera division. Chances are, this would have happened regardless of the pandemic and COVID-19 simply sped up the process.

The main issue with Olympus was that it offered cameras that only appealed to an exceedingly small sector of the market. The photography industry is (relatively speaking) a pretty niche industry already, and it is tough to be a niche within a niche.

The other problem with Olympus was that the unique selling proposition (USP) it offered simply wasn’t compelling enough. In my discussions with both the customers and the company, they described IBIS and the small lightweight body as their main selling points. Both those features are useful but ultimately, insignificant.

The main reason I say this is because there are plenty of options available that people could comfortably describe as better than what Olympus has. Consider the Olympus E-M 1 Mark III. This camera is priced at $1,599 and that’s after a rebate. Cameras like the $1,499 Fujifilm X-T3 are far better values mostly because they’re less expensive, offer more notable features, and have a much larger sensor.

Sony also has a number of less expensive APS-C cameras available and for many consumers, the few minor benefits that Olympus offered just weren’t enough.

The biggest problem with Olympus was that it didn’t focus a great deal on video, and that’s where companies like Panasonic truly excelled for a long time. The Panasonic GH5, for example, was one of the very first few cameras on the market that offered 4K 60p at an affordable price point. In fact, even now I can’t find a single Olympus camera with video features that can compete with the GH5 or the Fujifilm X-T3.

If you’re a photographer in the market for a new camera, it’s difficult to recommend an Olympus. The issue is that for many people, the difference in image quality is tough to swallow, especially considering the prices of competing options.

Essentially, Olympus cameras cost more to offer lesser image quality and most consumers just didn’t see the benefit. This is not to say that Olympus cameras are not worth buying because they are brilliant. Market perception, however, can be tough to shake.

When Panasonic moved over to full-frame, many people wondered if Olympus was going to do the same. Many people also wondered about the future of the format and assumed that Panasonic will eventually stop producing new Micro Four Thirds products.

This makes sense — as a company, it would be more effective for Panasonic to concentrate its efforts on one format, and it seems full-frame is the one they have picked.

When I asked Olympus the question last year in March, it reconfirmed its commitment to Micro Four Thirds. In hindsight, it seems that maybe the company didn’t want to invest more into the photography industry. The main problem is that even if Olympus did decide to move over to full-frame, what would it actually offer?

As a company it doesn’t have a long history in video, so that wouldn’t have been a great option. If it’s wildlife and action, then it already has that covered with its current line of cameras and lenses. Canon and Nikon already dominate this sector for full-frame. Unfortunately for the company, it just didn’t have anything compelling enough to offer by moving to the larger format.

The Formats Future with Photographers

The number of cameras being sold worldwide peaked in 2010. Since then, the industry has seen sales figures drop year on year. Many of us assume that this is because the industry is in decline and that smartphones have caused it. 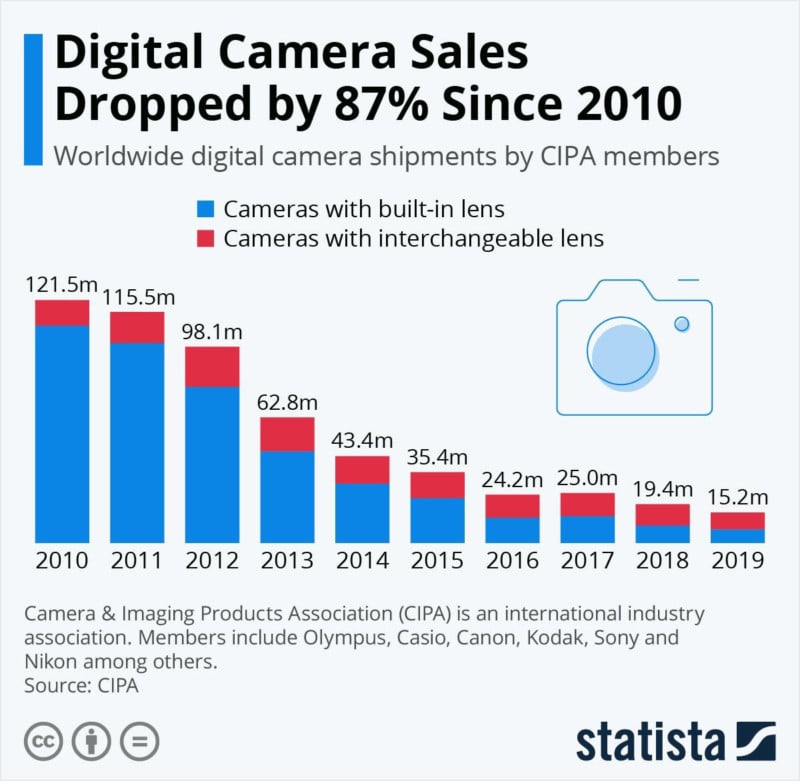 There are two reasons why I think this. The first is that the market for professionals remains largely unchanged. Sales of cameras with interchangeable lenses have not declined anywhere near as much as cameras with fixed lenses. Sales are returning to the figures we had in 1999; around the time when digital was first taking off. This surge in sales could simply be a digital bubble.

Many companies grew in size along with the industry and when sales numbers started dropping, some companies just couldn’t react fast enough. We now have too many options in a market that’s still shrinking from its peak. Something has to give, and it seems Micro Four Thirds is the likely victim.

For photographers, there are lots of better options available at similar price points and for most us, Micro Four Thirds does not offer anything significant. The IBIS features and longer reach with lenses are useful, but only to a small minority. Ultimately, I think the days for this format are numbered when it comes to photographers.

Why Micro Four Thirds Is Not Doomed

There is one area where this format could thrive, and that is video. The video camera industry hasn’t struggled in the same way that the photography industry has. There is still a healthy demand for cameras with the Micro Four Thirds sensor.

For one, the smaller sensor can allow for faster frame rates, without generating as much heat as larger formats do. This is why cameras like the Panasonic GH5 did so well and continue to be popular among videographers.

The second big reason is IBIS. For photographers, built-in stabilization is mildly useful in comparison to what it offers videographers. In general, smaller sensors tend to have much better built-in stabilization features. This is why action cameras like GoPro, no longer require gimbals in order to produce smooth footage. With further developments in this area, we could see Micro Four Thirds cameras with similarly performing IBIS; giving them a powerful advantage over larger sensor cameras.

There several other benefits of the format too like the lens mount, but what I think is important to note is that this format is probably not going anywhere anytime soon. Even if Panasonic stops developing high-end cameras for the format, other manufacturers will certainly take its place. We’re already seeing how Sharp is planning on releasing an 8K camera of its own. For that reason, as a format, I think it still has lots of life ahead.

It is upsetting to see a fine company such as Olympus having to sell off its camera division. Despite this, these tough times may provide some useful lessons for the industry. Companies may start focusing their efforts where it counts, and the competition could be beneficial to the end consumers.

Ultimately, although the format may not continue to hold a prominent position in the photography industry, I think Micro Four Thirds will continue to thrive in the video industry. These types of cameras offer a great deal of value, which could be difficult to match with larger sensor cameras.