Right on cue, CIPA has released its latest report, showing how camera shipments in March were affected by the rapid spread of the coronavirus, and the economic shutdown that followed. No surprises here: the numbers are grim.

The sharp drop on the graph, which will very likely continue downward for at least the next few months, looks like a statistics mistake when compared to the previous two years: 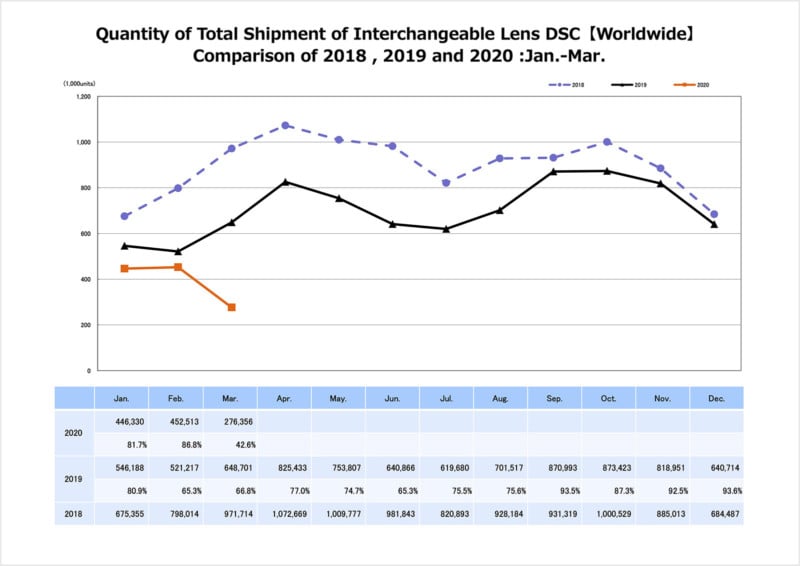 There’s not much more to say here. As Canon pointed out in its own financial report yesterday, COVID has completely changed the economic landscape, and luxury items like Interchangeable Lens Cameras are not high on anybody’s priority list when meeting expenses like rent, utilities, food, and health care is in real jeopardy for tens of millions of people across the world.

If you want to dive into the nitty gritty numbers behind the percentages above, you can find the detailed data broken down by region in this chart.

The main call-out is that DSLRs were hit worse, with shipments dropping more than 66% worldwide compared to March 2019, while mirrorless cameras saw a less drastic, but still significant, 46% drop. ILC shipments to Japan and “Asia” (which excludes Japan and China) saw the biggest drop.

10 Tips for Taking Better Photos of Your Dog

Can Pixel Shift Compete with a Bigger, Higher Resolution Sensor?