Capture One took to YouTube earlier a few hours ago to show off a couple of very useful new tools and features that will be coming to Capture One 20 this month. Better yet, this update will be completely free for both subscribers and perpetual owners.

The upcoming features were shown off as part of a special 30-minute live stream on the Capture One Pro YouTube Channel, where Product Manager Alexander Flemming and Business Development Manager David Grover demonstrated the update in a sneak peek video that’s reminiscent of something Adobe likes to do.

There are three major features coming to Capture One 20 later in May: a new healing brush, a new clone brush, and a robust before-and-after feature.

The new healing brush automatically creates a healing layer and then allows you to make unlimited edits with unlimited sources on that layer. Additionally, the tool now intelligent selects your source point so you don’t have to manually fiddle with the layer in order to get a reasonable match. The clone brush works similarly, except that it creates a clone layer and, obviously, it doesn’t automatically select a source point or try to blend texture and luminosity: it simply clones your source onto the new point.

Both brushes should give you more control that you’re used to getting in Lightroom, and can save you a trip to Photoshop for retouching purposes. 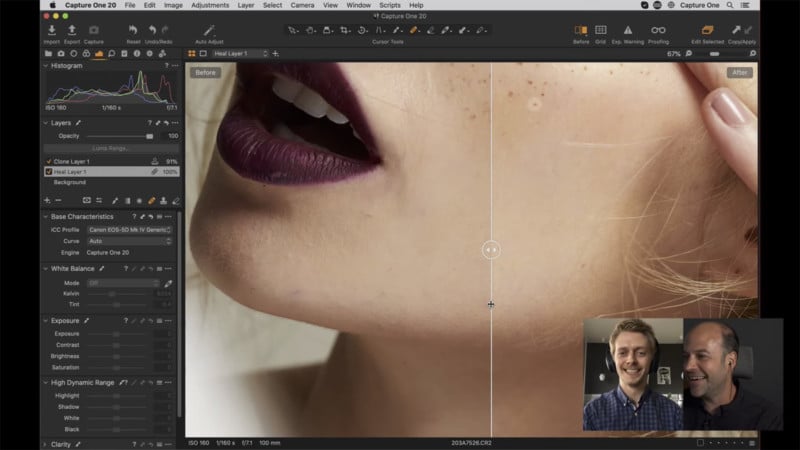 The second major addition is the new Before and After button.

This tool lets you see exactly what you’ve edited using a slider interface that works at all zoom levels and can even be used on multiple images at once. You can even edit in this view, so you can see the before-and-after changes live.

This is a huge improvement over the “hacky” way of doing it before, which involved either hitting Alt + Press on the Reset button, or resetting and undoing over and over again. And if you don’t like the slider version, there’s also a “Full View” option that lets you toggle between before and after on the whole image.

You can see all of this demonstrated in the full live stream below:

As we mentioned above (but it bears repeating): this update is scheduled to launch later this month and it will be free to all Capture One 20 owners—both subscribers and owners of a perpetual license. To learn more, check out the livestream above or just keep an eye on the Capture One website in the coming weeks.