In addition to the two full-frame cameras announced this morning, Canon also unveiled not one, not two, but four new RF-mount lenses during today’s virtual product launch. The RF lens lineup now includes an 85mm f/2 IS STM, a 100-500mm f/4-7.1L IS USM, and the two odd-balls of the day: the ultra-compact and affordable 600mm f/11 IS STM and 800mm f/11 IS STM

The most affordable lens of the four announced today is the Canon RF 85mm f/2 IS STM Macro, which joins the RF 35mm f/1.8 IS STM as another affordable entry that will probably appeal most to buyers of the entry-level EOS RP.

It’s compact and lightweight, with a maximum aperture of f/2, a maximum magnification of 0.5x, and a minimum focusing distance of 1.15 feet. There’s also built-in IS with up to 5-stops of promised shake reduction, and a customizable control ring that can be set to various functions.

Here’s a closer look at that lens: 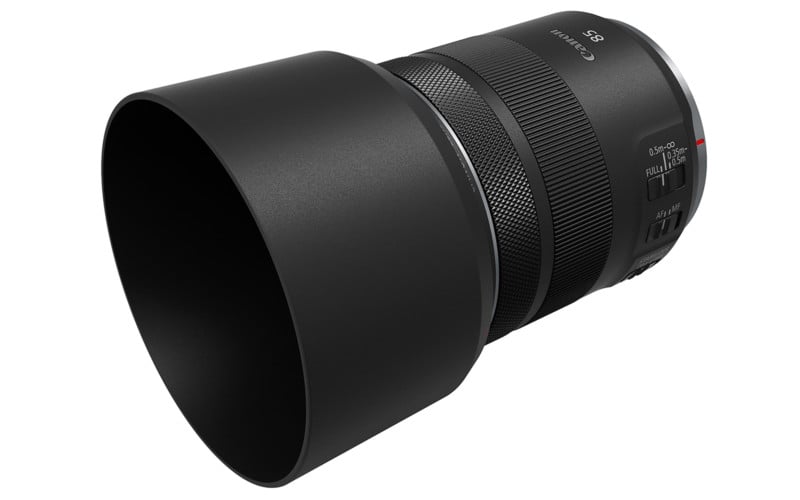 Going from most affordable to most expensive, the big boy of today’s product drop is the Canon RF 100-500mm f/4-7.1L IS USM is an extremely versatile telephoto zoom lens aimed at professionals. As with some of Canon’s other RF-mount zooms (see: the RF 70-200 f/2.8L) the lens is relatively compact given its extreme focal range. Built in image stabilization offers up to 5-stops of shake reduction, and not one, but two “Nano USM” focus motors deliver “high-speed, smooth and quiet auto focus” at a minimum focusing distance of just three feet.

This lens, too, features a customizable control ring, but since it’s an L-series lens it’s also dust and weather resistant, features a fluorine coating on the front element, and uses a special lens hood with a “side window” that allows you to adjust “specialty filters” even when the hood is attached. Finally, the two most-talked-about RF lenses ever since they hit the rumor mill: the ultra-compact RF 600mm f/11 IS STM and the RF 800mm f/11 IS STM take advantage of their extremely small aperture and the use of Diffractive Optics (DO) to pack the reach of a super-telephoto prime lens into a package that’s both cheap and hand-holdable.

Both lenses use an extending mechanism to keep the lens body as small as possible for travel. When not in use, the 600mm and 800mm lenses are just 7.85 inches and 11.09 inches long, respectively; when you need to break them out, you simply extend the front element out like a trombone, increasing their respective lengths to 10.61 inches and 13.85 inches.

Then you hope to god there’s enough light around because you’re limited to a FIXED aperture of just f/11 on both lenses. That’s right, you can’t actually stop down further, as there are no aperture blades in either of these lenses.

Both lenses offer up to 5 stops of shake reduction, just like their IS counterparts, and both use lead screw-type STM motors for focus control. Like the rest of the RF lineup, you get a customizable control ring as well.

Here’s a closer look at these odd optics: Finally, Canon also announced two extenders for the RF mount: the Extender RF 1.4x and Extender RF 2x. There’s not much to say about these except that they “inherit the same high image quality, precision AF and reliability, such as being drip and dustproof, of EF lens extenders,” basically extending the usability of the lenses already released for the RF mount.

You can see those below:

To learn more or pick up any of these products for yourself, head over to the Canon website or click here to pre-order yours.