In a pseudo Part III to their sensor size comparison series, Jay P Morgan and Kenneth Merrill over at The Slanted Lens decided to answer a question that popped up several times in the comments of a previous video: can the pixel shifting on a Micro Four Thirds or full-frame camera match the output of a 100MP medium format sensor?

The three cameras being tested here are the Olympus OM-D E-M1 Mark III, the Sony a7R IV, and the Fujifilm GFX 100, and the point was simple: limitations of pixel shift photography aside, can the output from the Olympus and Sony’s respective ‘pixel shift’ modes out-perform the standard, single-shot performance of the 100MP medium format GFX 100?

The side-by-side test involved capturing photos of The Broad art museum, since its architectural style and location was ideally suited for highlighting issues like aliasing and any problems with dynamic range.

First, they compared the full-frame Sony to the medium format GFX. When using the pixel shift mode with the Sony, you have two options: a 4-image stack that spits out a sharper version at the same 61MP resolution as a single shot; or a 16-image stack that produces a whopping 240MP file.

You can see side-by-side comparisons of the output from the Fuji and the Sony (in both modes) below: 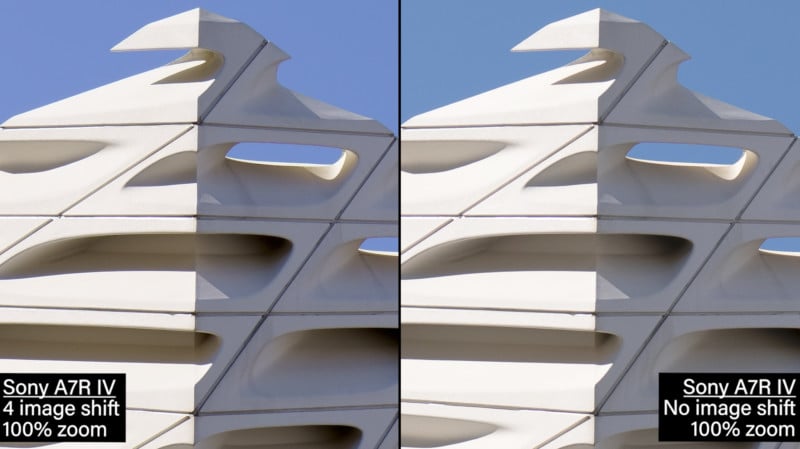 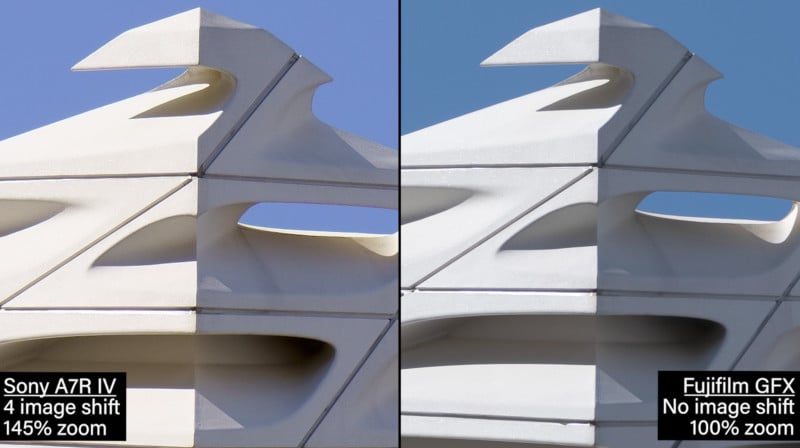 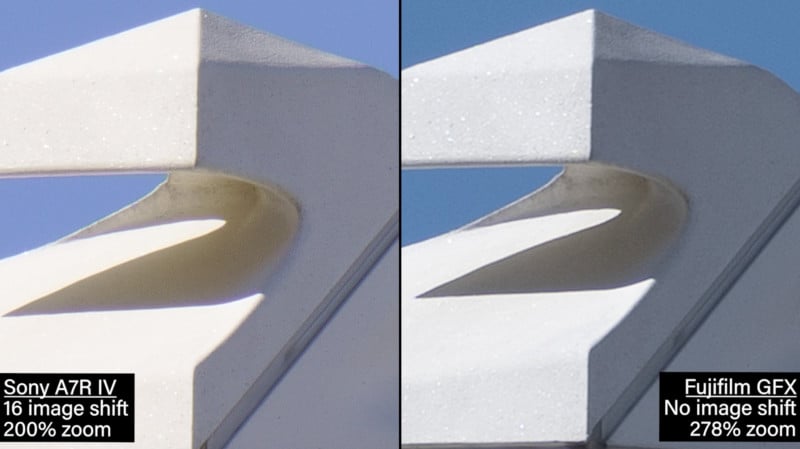 Next, they compared the Olympus output to both the Sony and the Fuji GFX.

Interestingly, the quality of the Olympus file came out much sharper if you process the files in Olympus’ own Workspace software, as compared to using Photoshop. You can see a side-by-side below and there’s really no comparison: if you’re using the pixel shift mode on your Olympus camera, definitely use Workspace to stack the images. 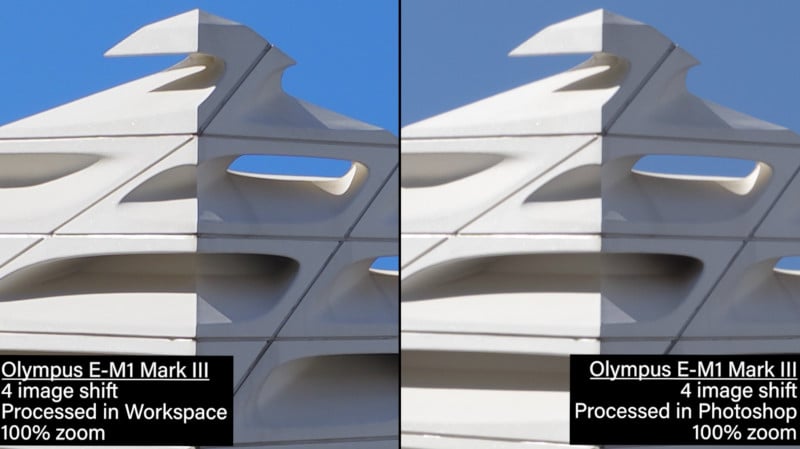 The rest of the comparisons were done using the Workspace version (obviously) in order to keep quality as high as possible. 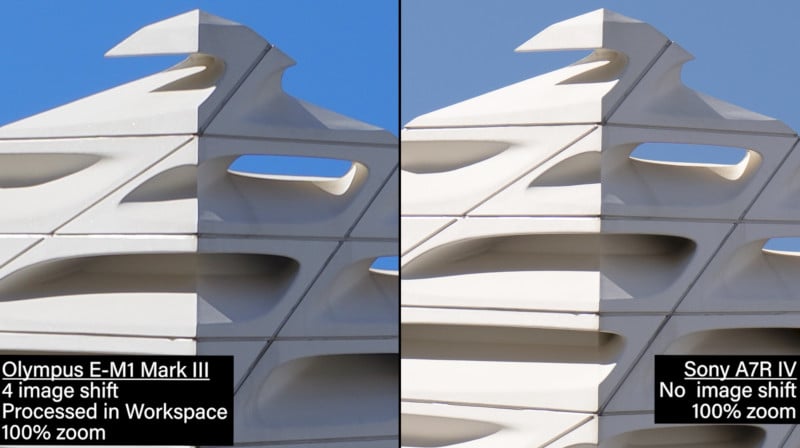 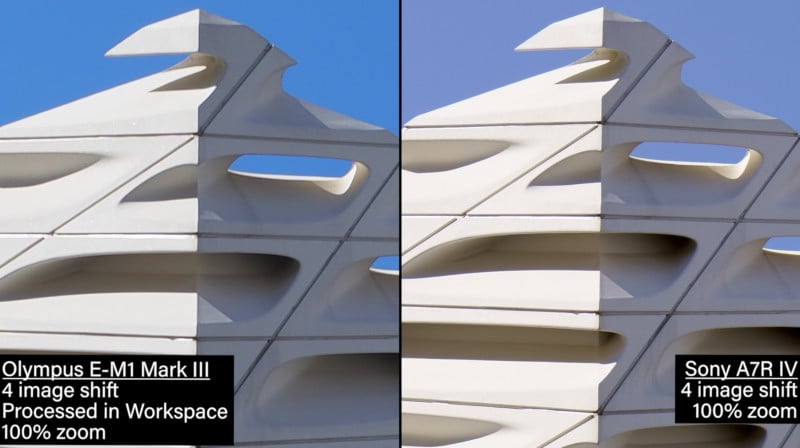 Finally, you can see the Olympus pixel shift image followed by the GFX all by itself below. For some reason, they didn’t show these side-by-side in the video: 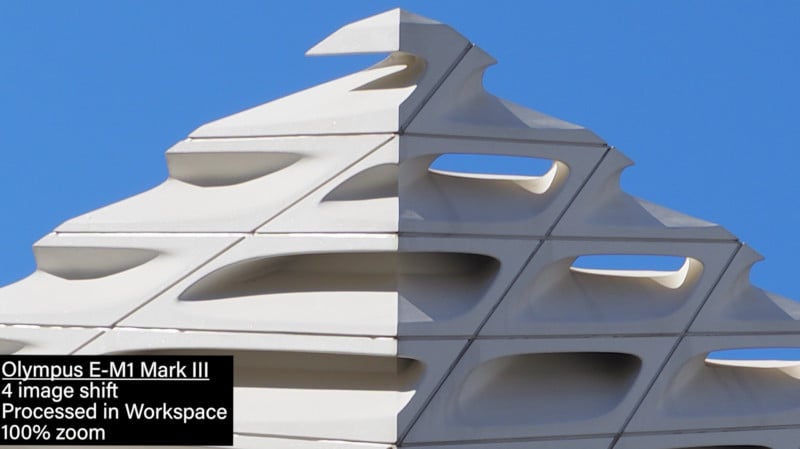 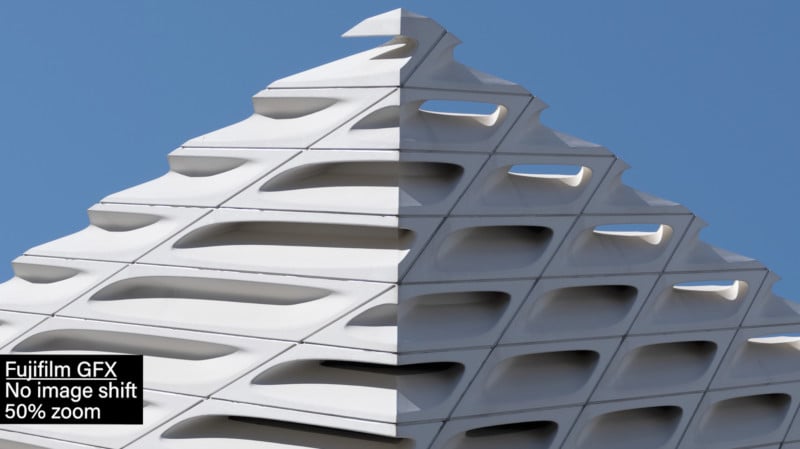 An interesting aside: Jay makes a good point at the very beginning of the video before jumping in. It’s worth reprinting in full just to keep these kinds of technical comparisons in perspective:

The reality of photography is: if it’s creative, and it communicates, and people will pay you for it, that’s commercial art. It doesn’t matter if you shot it with a shoebox, with a piece of tin, with a hole pocked in the front of it. It doesn’t matter.

So these kinds of conversations are interesting. But the reality is that they are for tech heads.

Of course, there’s nothing wrong with being a “tech head” and enjoying the occasional pixel-peeping comparison, but it’s worth keeping Jay’s words in mind since sensor size comparisons tend to get people’s blood pressure into the danger zone.

Anyway, to see this intriguing comparison for yourself and compare more side-by-side images of pixel shift vs medium format vs non pixel shift, check out the full video up top or head over to The Slanted Lens website to read their full write-up.

Image credits: All photos by The Slanted Lens and used with permission.

An Insider’s Guide: How to Photograph a Concert, Start to Finish

How to Pre-Visualize in the Field for Better Landscape Compositions