Both photos were captured from Bendheim’s living room window on the 6th floor of his apartment in Chelsea—one in April of 2019, and one in April of 2020. Last year’s photo was simply a fun experiment in shooting star trails in one of the most light polluted places on Earth.

“April is a good time between the brief storms there are clear cooler nights. You can capture stat trails with very little clouds,” he tells PetaPixel. “The photos are taken with my Canon 5D Mark III and a Tamron 15-30mm f/2.0. I capture multiple images over the course of 6 to 8 hours, then batch them in Photoshop to get the star tails.”

The idea probably would have been a one-and-done, but this year presented a unique opportunity. Because of COVID-19, air traffic has almost completely stopped over NYC, and Bendheim wanted to see what the before-and-after would look like. So he tried again. 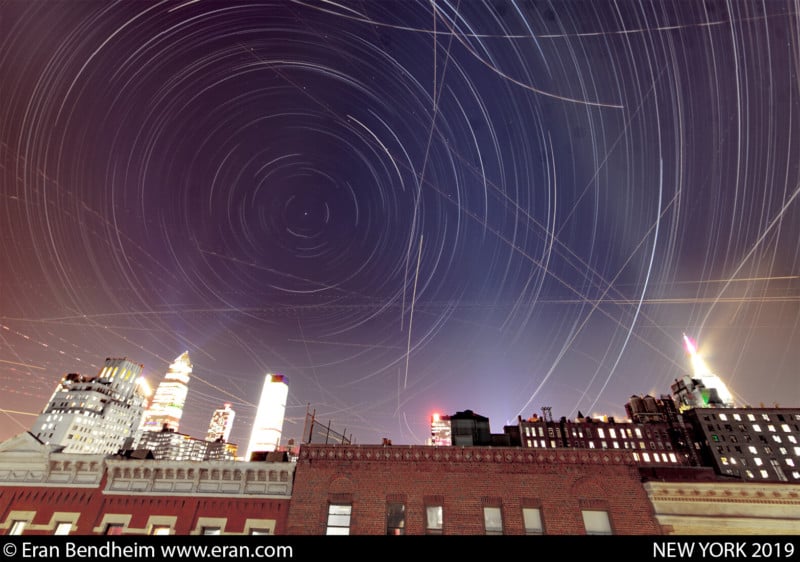 And the same shot, taken almost exactly a year later, in 2020: In the 2019 photo, you can see not only airplanes, but helicopters from both the NYPD patrolling and various TV networks doing air traffic reports. The 2020 photo is pristine by comparison. Of course, the sky over New York isn’t totally silent, even now, but the difference between the two photos shows how much easier it is to capture a clear New York sky in 2020.

Image credits: Photos by Eran Bendheim and used with permission.