The European Southern Observatory’s Very Large Telescope (ESO VLT) has captured a world’s first: the first ever image of two giant exoplanets orbiting a young ‘Sun-like’ star 300 light years away from our own. The photograph could provide important information about the formation of our own solar system.

The groundbreaking image—which is discussed in detail on the ESO website—is described as “a snapshot of an environment that is very similar to our Solar System, but at a much earlier stage of its evolution.”

As the ESO explains, direct observations of exoplanets are exceedingly rare but incredibly important in the search for planets like our own, which might support life. Imaging two exoplanets around the same star is even more remarkable, and capturing an image of two planets orbiting a Sun-like star is a unique accomplishment—a world’s first.

Here is the wide-angle image of the solar system in question:

And here is a closer crop: 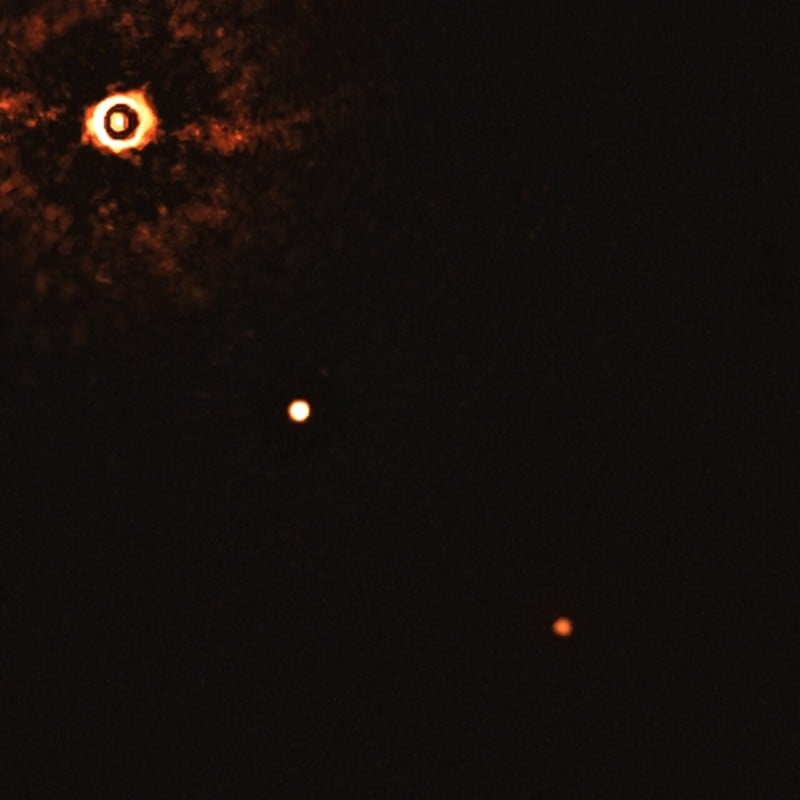 The photograph was made possible by using the Very Large Telescope’s SPHERE instrument, which uses a coronagraph to block bright light emitted by the star, allowing astronomers to detect and observe the much fainter planets surrounding them.

The image shows a star very much like our own Sun, only far younger, in the top left-hand corner. The two exoplanets—gas giants that are each several times larger than Jupiter—are the two bright dots in the middle and bottom right of the image.

Notably, both planets are very far away from their star: one is orbiting at 160 times Earth-Sun distance, and the other at about 320 times Earth-Sun distance. But while this image doesn’t show a system similar to ours in the present day, scientists hope that images like this one may shed some light on the early history of our solar system. For the rest of us, they’re just incredible to look at and at least try to fathom.

To learn more, check out the video explainer up top, head over to the ESO blog, or read the full research paper about this image in The Astrophysical Journal Letters.

The Story Behind This Photo Taken in 1977