Apple has announced a new series of 24-inch iMacs that feature a new design. With a 4.5K retina display, 1080p webcam, matching keyboards and mice, and a new microphone array, the new M1-powered iMac comes in seven colors and will begin shipping in May.

The new iMac is akin to the power and performance that has already been proven in the Mac mini but with an integrated monitor and a brand new design and offered in six colors. Apple says that the front of the new iMac is a single sheet of glass that “covers the entire surface.” While early, leaked renders of what this new design might have looked like are close, Apple has still kept the “chin” below the display on this new design, which houses the speakers, fans, and much of the computing power. 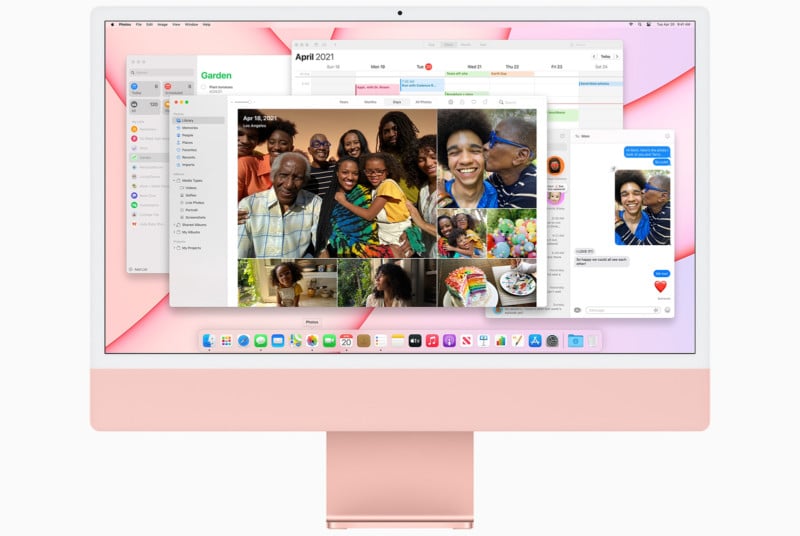 The back of the iMacs, which Apple says are seen nearly as frequently as the front, have been designed to “celebrate color” with bold, saturated shades. The computer itself is incredibly thin (11.5 millimeters thin) thanks to the benefits of the M1 chip. It has two USB-C ports and two Thunderbolt ports and a new power adapter that connects magnetically. 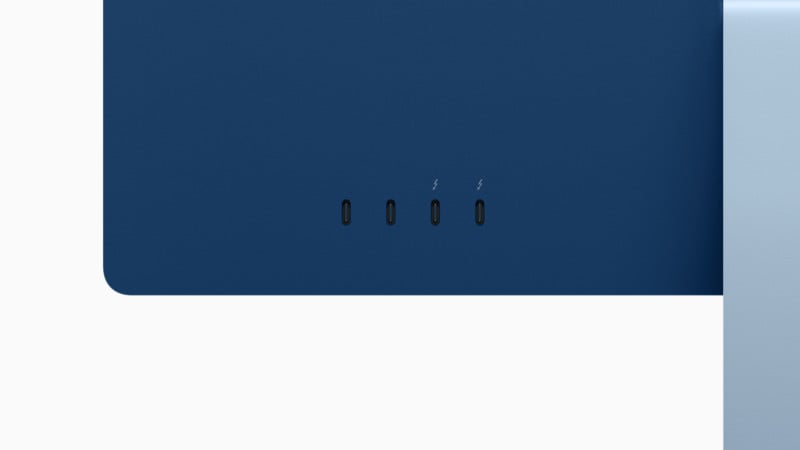 The thin, woven-wrapped cord connects to a power brick that can be hidden behind a desk or on the floor, and an ethernet cable can also connect to that power brick which further manages cables. 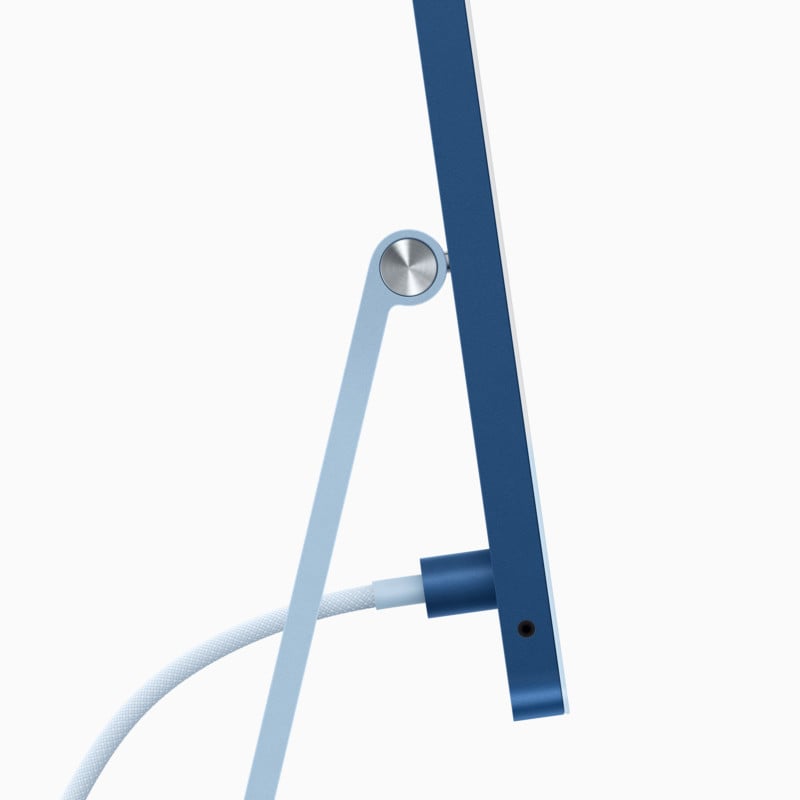 Apple says that the system on a chip architecture of the M1, what was once multiple chips scattered across the motherboard, the new iMac consolidates them into the one, powerful M1 chip. This also allowed the company to compress the bulky thermal system in the last generation iMac into a set of two small fans. Apple says that the new iMac runs “exceptionally quiet.” Apple says that with typical use, it will stay under 10 decibels, which are barely audible to the human ear.

The new iMac runs up to 85 percent faster with regard to CPU performance, which translates to a computer that Apple claims can easily process 100-megapixel photos. The GPU is up twice as fast with certain apps like Affinity Photo and Photoshop, and up to 50 percent faster than the most powerful discrete graphics in the fastest 24-inch iMac. Apple says that this new iMac can edit up to five streams of 4K footage or one stream of 8K footage without dropping a frame in Final Cut Pro.

The compressed computer body has allowed Apple to make the entire computer’s footprint even smaller than the previous generation, letting it fit more easily into more spaces.

The monitor on the new iMac is what Apple is calling a “best in class display.” It’s a 24-inch 4.5K retina monitor that can achieve 500 nits of brightness and is color accurate within the P3 color gamut. It also has a coating that reduces reflectivity for easier readability.

The new iMac features an expansive 24-inch 4.5K Retina display2 with narrower borders and 11.3 million pixels. With a P3 wide color gamut and over a billion colors, plus 500 nits of brightness, images are vivid and more brilliant. This new display also features True Tone technology, which automatically adjusts the color temperature as the environment changes for a more natural viewing experience. 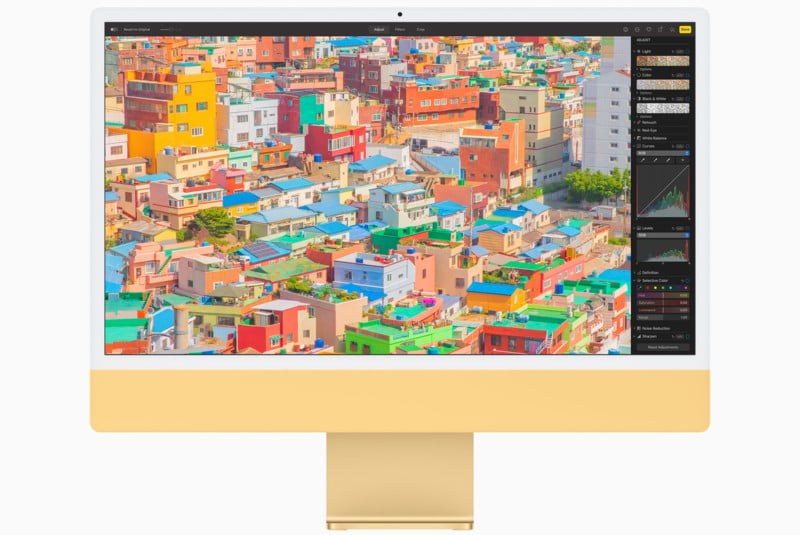 The camera, mics, and speakers have all been improved as well. The new iMac has a 1080p facetime camera with a larger sensor that Apple says performs better in low light. It pairs with the M1 and Apple’s image signal processing (ISP) to further enhance videos. The camera can make more intelligent exposure decisions, apply better noise reduction, and adjust tone mapping to deliver enhanced dynamic range. The company says that it is “the best camera in a Mac.”

Apple also outfitted the iMac with the “best mic system ever in a mac,” which uses three microphones and beamforming technology to better ignore background noise. The speakers have also been improved, with greater power dedicated to the speakers. It is a six-speaker system that the company claims will produce high-quality sound despite the small casing of the computer.

Thanks to M1, the new iMac shares a lot in common with the new MacBook Air, Pro, and Mac Mini. iMac can wake almost instantly, and apps can launch extremely fast. Apple promises the experience is fast, fluid, and capable of handling hundreds of tabs in Safari as well as intensive photo edits.

The company syas that the iMac is up to 85% faster than the previous 24-inch iMac models in Lightroom. 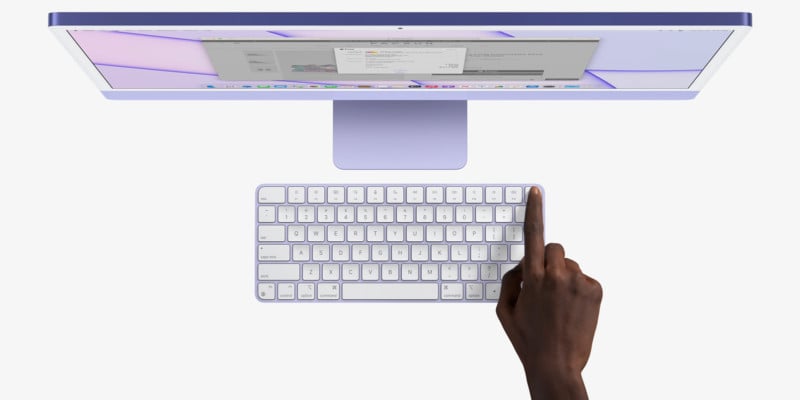 Apple is also introducing a new magic keyboard set that matches the new colors and that also integrates touch ID. Additionally, there are a new set of magic trackpads and magic mice in the new colors No other changes were noted for the mice or the trackpads). 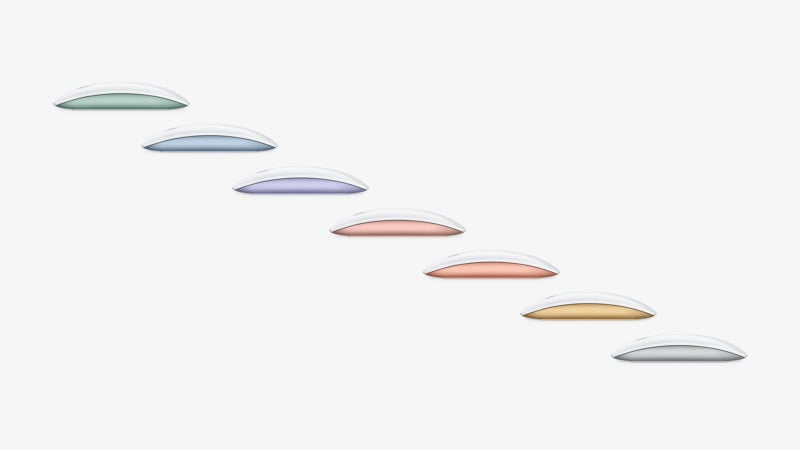