Whenever a discussion touches on the subject of RAW processing and photo management applications, digiKam rarely comes up. Even when talking about open source photography software, RawTherapee and darktable are often the only names that are thrown around. So let me give you an elevator pitch that makes a case for digiKam.

1. digiKam is available for all mainstream platforms, including Linux, macOS, and Windows. For Linux users, there is even an AppImage package that you can run without any installation.

2. What digiKam has in common with RawTherapee and darktable is cost, or rather the lack thereof. You may or may not care about digiKam being an open source software, but the fact that you can get it free of charge is undeniably appealing.

3. digiKam doesn’t lock you into a proprietary database or format. In fact, it does not touch original files and directory structure.

4. The RAW processing engine in digiKam is powered by the dcraw library. It may not matter for those who are not interested in the technical nitty-gritty. But what matters is that dcraw often adds support for new camera models faster than many proprietary tools.

5. digiKam features a wide range of useful tools for managing large photo libraries with thousands of RAW files, JPEG photos, and movies. Configurable import tools and flexible tagging, geotagging and geocorrelation features, powerful search and filtering capabilities, and a batch manager for creating photographic workflows are all present and accounted for. There is even an image quality sorter for weeding out images that don’t meet specific quality standards. 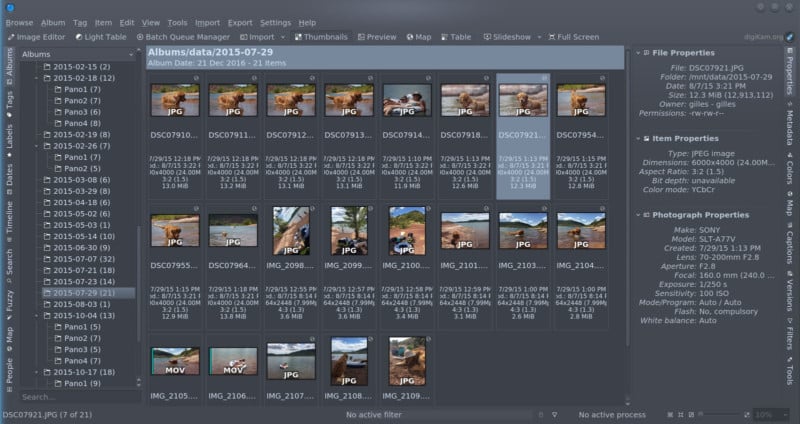 6. Don’t like the default processing engine in digiKam? No problem. The application makes it possible to use RawTherapee and darktable as its back end for processing RAW files.

7. digiKam strikes a perfect balance between functionality and usability. What it lacks in advanced features and tools of a dedicated RAW processing application, it makes up for in a less steep learning curve.

In short, give digiKam a try. You have nothing to lose, expect an hour or two of your time. But in return, you might get a tool that can take care of all your photo processing and organizing needs.

About the author: Dmitri Popov is an amateur photographer and professional tech writer. He’s the author of the digiKam Recipes and Linux Photography. You can find more of his work on work on his website. This post was also published here.

A Timelapse of the Moon, Milky Way, Meteors, and Smoke Over Lake Tahoe

The Great @PetaPixel Instagram Revival (and How to Get Featured)